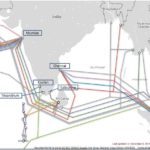 Therefore, it would be quite logical for Bharti Airtel to interconnect its Mumbai and Chennai cable landing facilities through underground optical fiber networks either by the national highway or by the railway track. Evidently neither has happened and the Bharti Airtel’s international connectivity was severed once the Chennai cable landing facility was damaged by Cyclone Vardah.

It’s another example of obsolete engineering doctrine that segregates the submarine and terrestrial networks.