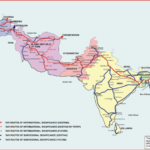 Little over a year ago, I wrote about various infrastructure initiatives linking South Asia with Central Asia. Using the gas pipelines’, power grid’s and road networks’ right-of-way of for cross-border telecoms link was central to my arguments.

Now the Indian Railways has planned to create a network, dubbed as ITI-DKD-Y corridor, to operate freight train service over a stretch of 6,000 kilometers. It will connect Bangladesh, India, Pakistan, Iran and Turkey through railway tracks, according to the Indian Express.

Indian Railways has called South Asian railway heads involved in the project to work out the nitty-gritty at a high-level meeting on March 15-16. Pakistan railway chief Javed Anwar is also being invited. There is one issue with Pakistan that needs to be fixed. While Pakistan allows freight trains and passenger trains from Delhi to Lahore via Attari, it has historically cited security reasons to not allow movement of containers on this route. For the demonstration, Indian officials said, it will not be a problem as it is a one-off run.

What energized the project is that a long missing link of 150 km in Zahedan, in the Baluchistan province of Iran, has now been established, connecting the country to the Pakistan Railway network on the border. So the Trans-Asian Railway Southern Corridor, as it is formally named, under the aegis of the United Nations Economic and Social Commission for Asia and the Pacific (UNESCAP), is good to go all the way to Turkey after certain operational exchange of notes and coordination between the nations concerned, which India is anchoring this month.

India, being the proponent of ITI-DKD-Y corridor, should inject telecoms component in this transcontinental railway initiative. RailTel Corporation, the telecoms subsidiary of Indian Railway, operates the country’s one of the largest optical fiber transmission network. Bangladesh Railway has laid optical fiber along the track for the first time in South Asia and Southeast Asia way back in early 1990s. Later it has been leased out to Grameenphone.

Therefore, blending telecoms in the proposed Dhaka-Kolkata-Delhi-Islamabad-Tehran-Istanbul railway project should be business as usual. It will open a new avenue to revenue and reduce the exchequers’ burden to implement the Eurasian railway project. This has to be captured in the master plan from day one.