Thinking of digital platforms and digital labor across the globe

It seems everyone is talking about digital platforms and digital labor.  This is not surprising, given the amount of news Uber alone is creating in many countries, including the ones LIRNEasia works in.  Everyone is worried about the impacts on labor and working conditions, while some are optimistic about the welfare effects created, especially for consumers who now have more choice and often cheaper rides.

Last year we completed the Sri Lanka part of a project looking at a specific type of platform-enabled economic activity that completes a transition with the buyer and seller never meeting – that of on online freelancing and microwork.  We are now looking at the same phenomena in India, and will soon start the same research in Myanmar.  For next year, we are hoping to extend the work to other platforms – the type where a meeting between the seller and buyer is necessary, such as accommodation (AirBnB and the like) and transport (Ola, Uber, PickMe) platforms.

In this context, it was interesting to spend the last three week in very different parts of the world, thinking and talking about these topics with policy makers, researchers and practitioners.

May 16-18 2017 was at the Stockholm Internet Forum, where digital divides were the topic of my panel. We ended up talking about online freelancing based on our research. Several other panels also got to the issues posed by new forms of digital labor. 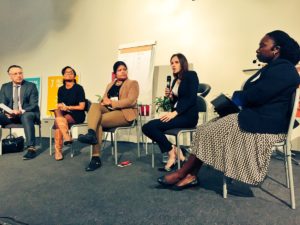 Helani in the panel at the Stockholm Internet Forum

May 25 – 26th was in Yogjakarta, Indonesia, with the DIODE Network. I am one of the co-investigators of the network headed by Richard Heek, PhD (U of Manchester).  I presented a preliminary mapping of Digital Labor research covering Asia.  We found a lot of studies covering the production of digital goods (e.g. factories in China), and a fewer on digital services, but all of them more or less talked about the exploitative nature of digital labor, alienation from the outputs of work, and general lack of control labourers have over their working conditions.  The papers were good. But the problem was that all except two didn’t really compare conditions of digital labor with conditions of non-digital labor. Seems there are many instances across emerging Asia that people are working under exploitative conditions with no power or control. In some of these cases, perhaps digital labor might be a step up for some.  Anyway, the DIODE activities will continue with the next meetings in Oxford and Cape Town. 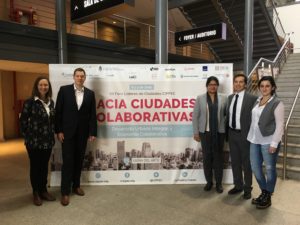 June 7 – 9th was in beautiful Buenos Aires, Argentina in my role as one of five advisors to an interesting project called “Harnessing the Sharing Economy for Local Development”. This project is run by a leading Argentinian think tank CIPPEC , and funded jointly by the IDB (Inter-American Development Bank) and the IDRC (International Development Research Centre, Canada). The project includes elements of smart city design, and examines the issues of the sharing economy in urban living systems.  Via a global call for proposals, we had selected six applicants who had proposed interesting research problems they wanted to answer through funding via the project.  So we spent a great deal of time talking about the way taxi riding platforms are working in Asia and Africa, and finding commonalities as well as very different ways governments are dealing with them. One of the more interesting examples of regulation came fro Sao Paulo, Brazil, where a regulation via tax/payment system had been imposed to encourage ride sharing, geographic inclusion and gender inclusion.

June 15 – 16 was in Ottawa, Canada, at a workshop on Digitization and the Future of Work. This was mostly a gathering of researchers who had (and are) already working on understanding how automation (especially the type of automation brought about by digital/networked technologies) is changing the nature of work, and what implications it has in the future.  Many members of the DIODE Network I mentioned above were also there.  The key theme was that all jobs are changing, but some will change more than others due to digital tech.  If we think of a job as collection of diverse tasks, the tasks that are most routine and most rule-based are the ones likely to be automated first (or most likely to be outsourced, which is a result of digital technology, but not always of automation – the task just gets done by another human, but elsewhere). So in the long run, the non-automatable jobs are likely to be in the creative industries and areas which require human/social interactions and cognitive abilities.  If this is true (and certainly all the labor economists who study this for a living seem to be saying this at this meeting and elsewhere), the focus on teaching people how to operate computers (simple digital tasks) and code (complex digital task) and building education policy based on this seems quite short sited. Eventually, these will be automated too. So how a country’s education policy handles this long-term challenge is important. 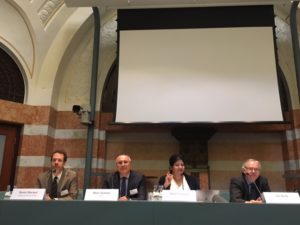 Helani at the Swedish National Board of Trade

June 21st was in Stockholm, at a seminar on Digital Economy, Trade and Development organized by Sweden’s Ministry of Foreign Affairs, the Swedish National Board of Trade and UNCTAD.  The opening panel had me and Tim Kelly, PhD, of the World Bank, discussing digital development. I drew on our systematic reviews and national surveys to speak about the impacts of various ICT interventions on development outcomes and the gender and income divide in ICT access in Asia. We also talked about digital trade, where I drew from our online freelancing work and described the barriers faced by the people we interviewed. The audience consisted of a large number of Ambassadors (specially Ambassadors to the WTO and various UN bodies from across the world).  So naturally, questions were asked about the role of multilateral and bilateral agencies in facilitating digital trade. My responses touched upon cross-border data flows and digital laborers – two areas where collective action could be taken.  I highlighted self-regulatory guidelines that could be adhered to as well changes to digital platform design which would make huge differences to the condition of workers, both of which stop well short of heavy-handed regulation.