International Day of Persons with Disabilities in Kathmandu

On December 4th, Nepali person’s living with disability and those who supported their cause, rallied along the streets of Kathmandu, Nepal to mark the 26thUnited Nations International Day of Persons with Disabilities (IDPD). Somewhere in the crowd was our researcher, Isuru Samaratunga.

“It was an eye-opener for the general public,” he wrote back to us. “Many people came out to watch the rally as it passed, and I assume the event did create much awareness.” 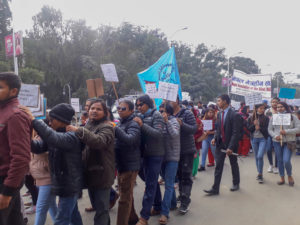 Apart from creating awareness, the rally also served as a networking event for PWDs and DPOs, most of whom were from the Kathmandu Valley. “There was a lot of enthusiastic conversation, and it felt like most of the participants were meeting each other after a long time.”

Isuru is currently in Nepal conducting qualitative research on persons with disabilities (PWD) in Nepal, as part of the extended AfterAccess work we are doing in the country:

“We are talking to PWDs about the kinds of devices they use, and how the devices help them in their daily routines, what barriers they face when using ICTs and how digital policy and tech can help include them in mainstream culture.”

An emerging trend in the responses so far is the difficulty in finding generalizable solutions to ICT-related problems faced by PWDs.

The goal of our work on PWDs is ultimately the goal of our work along any theme: inclusion – how do we help more people get online, and make meaningful use of the Internet? Inclusion was also the theme of the global celebrations to mark IDPD “Empowering persons with disabilities and ensuring inclusiveness and equality”.

The qualitative work will supplement quantitative research already conducted in Nepal, which found that 32% of PWDs aged 15-65 in Nepal would like assistive technologies for communication. The surveys also found that 54% of the same group have had no schooling whatsoever.

A summary of the quantitative findings from Nepal can be found here.