We are walking, 5km off the Wellawaya-Buttala road. The village is surrounded by higher land. The road to Indika’s home winds through sugar cane fields along both sides of the road – sugar cane farming is the most common livelihood among villagers in this area. Chapa, our sign language interpreter, makes a video call to Indika – we are not certain how to find his house. A few minutes later, we meet a tuktuk coming towards us. Indika is driving. I don’t understand anything of the conversation between Chapa and Indika. Apparently, they first met at a conference in Colombo, long ago. We get into the tuktuk and Indika drives us to his house. We see Wandinaheala Rock from his garden and, at the top of the rock, a huge flag waving in the breeze. Indika tells us it was his younger brother who – like Indika and his wife – has been deaf from birth that placed the flag on the rock. The younger brother lives with his parents, a few houses away.

I can hear the blue-brow flag flapping in the wind. 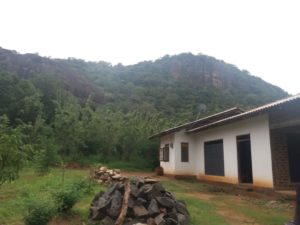 Indika’s home on the outskirts of Buttala, Sri Lanka

We sit in the living area and talk about Indika’s day-to-day activities. Indika studied sign language at a special school, so he and Chapa have no difficulty communicating. We learn about Indika’s vegetable cultivation. He takes the harvest to market in the town in his tuk tuk. Initially, he had trouble negotiating prices with buyers. He’d have to write his prices down on pieces of paper and show the other person. Now, he just opens up the calculator on his phone and types the amount in for the buyer to see. The buyers know him well now, and Indika believes he gets the best prices from them.

Indika’s mother joins the conversation while we roam around the chena. I’m captured by the speed and apparent fluency of the sign-language conversation between mother and son. I ask her how she learnt to sign.

Indika was two years old when she realized that her son had a problem with his hearing. She sought remedies through various rituals performances and ended up spending a huge amount of money on them. Then at about seven years old, Indika was enrolled in a special school. His mother took him to school everyday, and while waiting for her son, she also learnt sign language. It was a tough task for her. She thought of giving it up. But then her younger son was also born with the same impartment. She was determined to learn sign language. She sat for the final examination with sign language schoolteachers. All the other parents who were in the class with her had dropped out. Today, she is pleased about her effort since she is the bond of the family. Indika, his wife and his brother depend on their mother when visiting public places, such as hospitals.

“Every time I take Indika to hospital, I tell him that he only has to fill up his name and age in the registration form, but he is afraid to go there alone,” she tells me. “Recently he had a pain in the stomach, and was admitted to hospital. I had to be there in the hospital the whole time, to communicate with doctors and nurses. He couldn’t even explain where exactly the pain was”.

We chat a little bit more while exploring the chena and head back to Buttala town. Chapa and I talk about how good it is that Indika’s mobile phone enables him to work and conduct business independently. I also can’t help but wonder about the contrast in his engagement with the hospital. In almost every focus group discussion we have had in Sri Lanka with people with hearing disability, the issue of communicating at hospitals has come up. I hope that this is an issue we can help provide a solution to.