Living with disability: tales of contrast

It’s a rainy day and the unpaved roads weaving through the resettlement colony where 33-year-old Rajan (not his real name) lives have turned into streams of mud punctuated by large puddles. He arrives at the road-side kiosk where we are supposed to meet in a rickshaw – not one he paid for, but one driven by a friend who was kind enough to give him a lift. He uses a bamboo stick for support, to do the work his left leg cannot do for him. Crutches restrict him too much, he says.

The kiosk is a box on stilts with a doorway on one side and a window on the other. Rajan squeezes through the door and sits on a small bench inside the box. He sets up paan, chewing tobacco neatly wrapped in paper, and cigarettes. He will sit inside his box for the major part of the day, selling his wares through the window. All transactions are conducted while seated inside the kiosk. Rajan does not conduct any formal financial transactions and does not use a bank. He earns cash and believes that formal banking is difficult in rural and semi-urban India due to paperwork and reduced access to cash.

In the evening he locks up the box and heads back home to the room he shares with a friend. 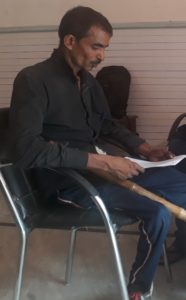 At home, Rajan’s friend takes care of the cooking and household chores. He has lived in New Delhi for over a decade, but his social circle is extremely limited, and he knows and visits only a handful of people.

The occasional trip to his family home in Bihar is made on the train. Getting to the railway station and boarding the train is not very hard for him. He has no smartphone and is happy to use ticket counters to buy the necessary tickets. The only problem is that the coach reserved for persons such as himself, who live with disability, is the last coach on the train. Most food vendors and conveniences such as washrooms are located towards the middle of station platforms and getting to any of these means a bit of a walk.

Rajan’s usual commute to and from work is made on foot. It is only on rainy days or on the occasion someone offers him a lift that he takes a rickshaw. He would like to own a motorized wheelchair, he says, which can be used to travel short distances on main roads as well. But he cannot afford one. He seems undaunted. “I can get about and do my work just as well as anyone,” he says.

Living with disability from birth has helped Rajan develop a “can-do” attitude towards living an active and independent life. Becoming disabled later in life, in contrast, has left our next respondent, in very different circumstances.

Let’s call her Mirani. She is 55 years old and had never thought about disability or imagined she would need to adjust to a completely different lifestyle to the very active and independent one she led until she was 50+ years of age. She was mentally unprepared to accept the changes and the challenges that came upon her following an accident at home, which left both her legs damaged.

Mirani uses a caliper and walker for support for the last three years. Her home is in semi-urban area in Jahangirpuri which lies in north-west Delhi. It is basically a resettlement colony divided into 12 blocks. The nearest landmark is the Jahangirpuri Metro Station. When you step out of her house, you are actually stepping on to the narrow and muddy roads of the colony.  She simply cannot leave her home. She believes she is too old now to learn how to use a wheelchair or a smartphone. “It’s no use to me now, I’m too old, I rarely answer a phone call, ….no space in the house to move around in a wheelchair” she says.

Nevertheless, Mirani’s home is equipped with a TV, which she watches from time to time. Her husband or son must still help her as she is not familiar with how the TV remote works.

Just a few months before our team visited her to talk about use of assistive technology, Mirani broke her arm when she fell inside her home. She has fallen inside the home and injured herself many times in this way. She was taken to hospital by her husband, to receive treatment. This and her regular trips to the hospital are the only occasions on which Mirani steps outside her home. Otherwise her existence for the last three years has been contained within the walls of her two-bedroom home which she shares with her husband and son.

To make these trips to the hospital, the family must hire an electric rickshaw that will drive them 5km to the nearest government hospital. Public transport such as a bus or train are not viable as Mirani cannot navigate the path to the bus stop or train station or get on board either of the vehicles. Emergency treatment, Mirani believes, is unaffordable not just for those such as her who live with disability, but even for others. Even so, the services offered by government healthcare providers is ineffectual and of poor quality, she says.

Mirani’s husband was a chef working in restaurants and engaging in catering for household parties. The duo used to run the business together, but now, Mirani is unable to help her husband at any work. Mirani is completely dependent on those around her to provide for her financially, and to maintain herself physically. She believes that assistance provided should be monetary as she does not see any usefulness in aids or technological devices.