India, Pakistan and Indonesia have improved Telecom Regulatory Environments since 2008, according to stakeholders. 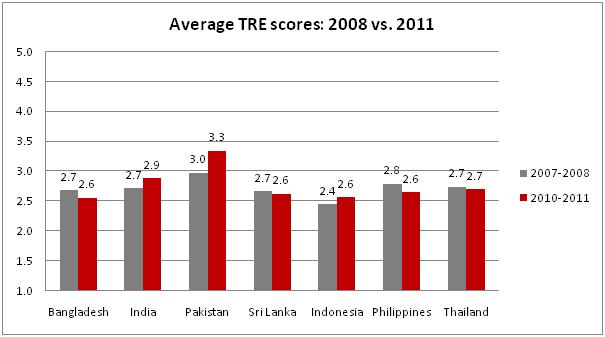 According the LIRNEasia’s 2011 Telecom Regulatory Environment (TRE) survey, stakeholders in India, Pakistan and Indonesia have identified the telecom regulatory environments in their countries as improved since 2008, the last time the survey was carried out.   In contrast, Bangladesh, Sri Lanka, the Philippines have seen the regulatory environments decline in effectiveness, while Thailandremains more-or-less the same.

The TRE Survey asks senior level stakeholders to evaluate the effectiveness of the telecom regulatory environment in the fixed, mobile and broadband subsectors along a Lickert scale of 1 to 5 (1 being highly ineffective and 5 being highly effective, with the mid-point of 3 being considered average performance).  Seven different dimensions of regulation (market entry, tariff regulation, interconnection, universal service, anti-competitive-practices, quality of service) are evaluated by the stakeholders.    This year, 349 responded participated in the 7 countries.

Within a country, scores for each of the dimensions reflect specific issues: for example, in India, the lowest score (of 2.3 out of 5) was received by the Access to Scarce Resources dimension in the mobile-sub-sector.  This is perhaps not surprising given the 2G scandals in India.  However, India did finally get around to allocating 3G spectrum in 2010, and did so by having its first ever spectrum auctions. Perhaps because of this, or because stakeholders believe that that the 2G scandal has finally paved way for transparency in allocation, the score of 2.3 this year is still an improvement, though marginal,  over the 2008 score of 2.2.   India’s USD 4 billion+ undisbursed Universal Service Fund and related policies are responsible for its biggest TRE score decline: the TRE for USO drops from 3.1 in 2008 to 2.4 this year.  In contrast, tariff regulation in the mobile sub-sector continues to be the top performer with a score of 3.9 out of 5.0, indicating stakeholder satisfaction at TRAI’s policy of forbearance which has enabled Indian consumers to enjoy extremely low prices thanks to competitive forces.

Pakistan saw an increased in almost all dimensions, with the exception of 3 (fixed market entry, mobile access to scarce resources and mobile interconnection) which showed minor declines.   In contrast, Bangladesh saw scores in all seven fixed-subsector dimensions decline, in some cases by as much as 1 point.  The scores are perhaps reflective of the issues related to the cancellation of several fixed licenses.  Overall only seven dimensions showed improvements in Bangladesh, and even these were marginal.   Thailand, whose overall performance is unchanged, has however seen significant declines in its Market Entry scores due the uncertainties caused by the concession contracts granted to the mobile operators and what their status would be when they expire starting next year.

Detailed analysis of the scores is available in the draft country reports for Pakistan, India, Thailand, Philippines, Sri Lanka, Indonesia, and Bangladesh.

All reports and analysis is in draft form at present. We hope you will comment on the country reports and cross country comparisons so that we may improve our analysis.