The good that comes from public hearings 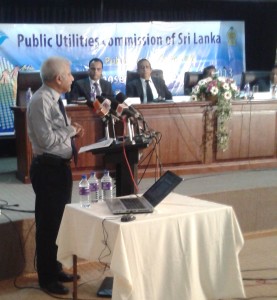 Today, the Public Utilities Commission of Sri Lanka, held the oral-presentation component of the 2013 tariff hearing. In their effort to accommodate 70 or so persons/organizations among the 200+ that had made written submissions, they limited speaking time to 5-10 mts depending on how many issues had been covered and did not ask any questions of those making presentations. This was a pity, since the whole point of face-to-face interaction is interactivity. That said, I still found the exercise educative. For example, the spokesperson for one organization asked why the PUCSL had allowed a component of costs for ROE, return on equity. He said that was not relevant to the CEB which is not a profit making entity. He is right, as evidenced by the President/Finance Minister’s statements as made in the 2013 Budget Speech (para 47.3).

Honorable Speaker, the evaluation of state enterprises purely from the point of view of commercial profit is not justifiable considering their contribution to economic and social welfare, by expanding the bank branch network all island, by providing electricity and water to all etc. If electricity and fuel are supplied to the market at cost price, at least Rs. 200 billion losses could be eliminated, leave alone making profits. If such action is taken, how many other enterprises will suffer and how many will loose employment? What would be the extent of the decline in living standards? These aspects should also be given consideration, when critics evaluate the so called lost making Electricity Board and Petroleum Corporation.

I have always been puzzled about how to regulate state-owned enterprises (SOEs) with no hard budget constraints. This is a new angle. It would be interesting what the PUCSL does with this recommendation. It aligns with our proposals to minimize the burdens that have to be borne by the consumers as we collectively try to overcome the bad outcomes of poor government decision making in the 1990s. Take off the ROE component at least temporarily I say, and cite the President as support.

The written submission in English is LIRNEasia_Submission_PUCSL_ElectricityTariff2012_final.

The written submission has been translated to Sinhala.

The press release in Sinhala is also available.