The XX Factor: How working women are creating a new society (Part 1)

The XX Factor is written by Alison Wolf, the CBE Roy Griffiths Professor of Public Sector Management at King’s College London. The book outlines how working women of the modern workforce have changed the society.  This change has occurred due to the fact that women are working in white collar jobs around the world hand in hand with men in contrast to past generations where both educated and uneducated women stayed at home once married.

Author starts the book with the story of Jane Austen (1775 – 1817), an English novelist braking off her engagement with Harris Big Wither in 1802, which was something extraordinarily brave at her time. Then the book describes modern highly educated professional females, 70 million worldwide who stand in a direct line from Jane Austen. According to the author this change occurred in 1960s’ primarily due to the opening up of elite education for women, change of job opportunities, shift of family structures and the arrival of the birth control pill.

The author states that at present, among the new female elite, the best educated, most successful women’s’ child bearing age had changed dramatically. According to the statistics, the proportion of American women who stay childless has doubled since 1970s’. Educated women who have children have them later in their lives. During the first quarter of the 20th century, marriage meant end of employment for females. After mid 20th century, returning to work after marriage and child bearing became standard at a median age of 12 – 13 years. In the past decade, the median age to return to work after birth has reduced to less than 6 years. This trend is due to opportunities for modern women and professional success (Figure 1). The graduate mother today who postpones child bearing until thirty and then returns to work suffer no earning loss at all for her first child. The uneducated women, who have children  earlier than educated women, don’t regret their choice. 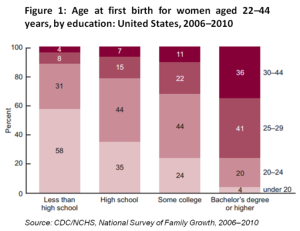 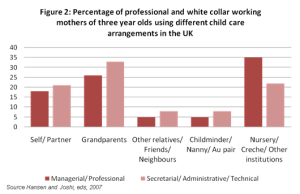 According to the statistics brought forth by the author, the return to work of elite females has changed the home life of their families. The women tend to do less unpaid work at home. As of 1978, 16% of American meals were eaten away from home. By early 2000, this was more than 30%. Furthermore, the modern couples have changed the way they parcel out tasks and activities as well. Both males and females even out their work at home together. Also, the leisure times of these professional couples have reduced as they allocate this time for the benefit of their children. Also, the author states that the professional success of these elite women today is due to the opening up of education for females (Figure 6 and 7). 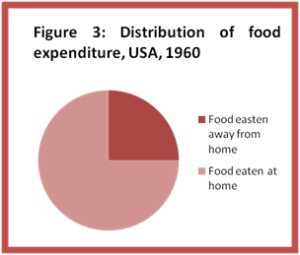 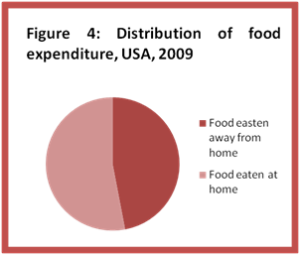 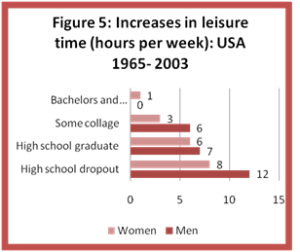 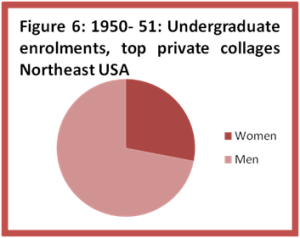 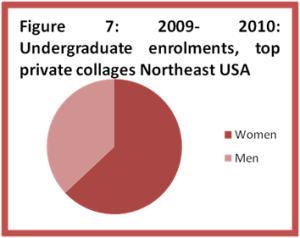 In 2012, number of successful, high earning, professional and business women was about 70 million worldwide. They belonged to upper middle class of “highly educated professional and salaried” workers and affluent business owners or even to the tiny group of super rich. The tiny group of super rich is not only from the developed world but also from the developing world as well (Figure 8). Among these females, there are females who inherited fortunes based on family companies (Olga Forte, Georgina Rinehart) and there are self made billionaires who made money from scratch (Oprah Winfrey, J K Rowling). This trend of educated women entering the workforce has made a great difference in volunteering and social work. Previously, the elite women volunteered their free time and contributed to the betterment of the society. Now, the ambitious elite women have entered the workforce and compete with men. Volunteering and social work done by these women are very low (Figure 9). But during the discussion, it was argued that these women contribute monetarily for social courses instead of their time. 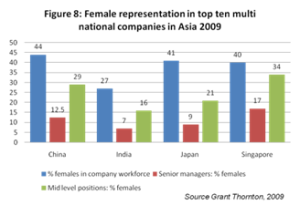 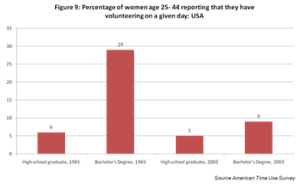 The Guardian reviewed this book as a crucial bible for anyone wanting to check up on anything about contemporary woman. The xx factor is an easy read and it generates an idea on the social change which has occurred due to women entering the workforce based on research, facts and figures around the world.

To view the slide-set of this book review click here.

Impact of COVID-19 on households and the workforce in Sri Lanka: Survey methodology note

The COVID-19 related lockdowns, mandating citizens to ‘stay at home’ brought about a host of challenges, from restricted mobility to large scale job and income loss to disruptions in the provisions of essential services as well as education. To an extent, especially in urban areas, digital technology-driven solutions have been able to bridge the last mile of service delivery and help minimize the disruptions, for example through app-driven delivery services, online schooling, etc.

LIRNEasia will present the findings of a nationally representative survey with a 2,500 sample across Sri Lanka. We explore the socio-economic impacts of COVID-19 by analyzing access to education, work, food and government services with a focus on digital technologies.

A recent survey by policy think tanks LIRNEasia and ICRIER has shown that Maharashtra was able to ensure continuity in formal education for 38% of its school-going (enrolled) children during the COVID-19 lockdowns. The state compares well against the India national average, as well as that of NCT Delhi, whose performance stood at 20% and 25% respectively.