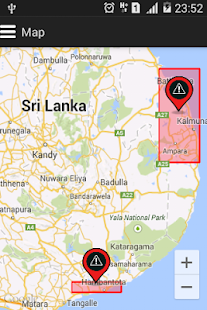 It was not all sunshine and fare weather that greeted us on the December 26th this year in Sri Lanka. Instead a country in a crisis dealing with the continuous week long rains washing away sides of hills and flooding (copy of Dec 26th landslide and flood warnings issued by DMC). While we were at the Hambantota exhibition, there was uncertainty in being cut-off from Colombo with flash floods crossing roads in various E/A/B network. Had the rains continued on the 26th we may have been stranded or had great difficulty returning to Colombo. An incident or situational map, like Google’s Alerthub, would have been informative in comforting the uncertainties. I think that is the intention of the new mobile friendly DEWN 2.0 release. The missing piece is the diluting of alerting authorities for receiving more localized incident reports from Gramaniladari or Divisional Secretariats.

A parade, media conference, and an exhibition were organized to commemorate the tenth tsunami anniversary also known as the national safety day.  The event was co-sponsored by the Asian Disaster Preparedness Centre and the Sri Lanka National Disaster Management Centre. 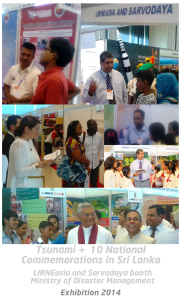 The event was held in the state of the art Mahinda Rajapaksha International Centre. The President cancelled and was replaced by Hon. Speaker of the Parliament Minister Chamal Rajapaksha as chief guest. President remained in Colombo to take care of the on going hydrological crises in the Island. As a result the day long agenda was stripped down removing the outdoor parade. Bus loads of children, ready to parade, attended the media conference, instead, and then the exhibition.

Sarvodaya and LIRNEasia combined to showcase the unique disaster management (especially early warning) action research we had championed over the past decade. The message given to the inquisitive public and experts was that we were bridging the last-mile with ICTs. A few of the key projects are last-mile community-based warning, disease surveillance and notification, interactive voice warning/sitrep and more.