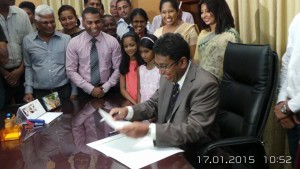 Five years ago, our Lead Consultant Economist, Dr Harsha de Silva, entered Parliament as an opposition national-list MP. For those unfamiliar with idiosyncrasies of Sri Lankan politics, that is an MP without constituency responsibilities who is appointed by a political party based on the contribution he/she may make to legislative or executive functions. Without doubt, Harsha was one of the best national-list MPs in the 14th Parliament. In the early years, he continued to engage in research-related activities sometimes on behalf of LIRNEasia and sometimes on his own.

Few years back, his party made him a constituency organizer which left him little time for research. The margin by which his constituency voted for his candidate in 2015 suggests he is doing a very good job as a retail politician as well.

Harsha has been appointed Deputy to the Prime Minister with responsibility for Planning and Economic Affairs in the transitional government. We know he can be counted on for informed, evidence-based policy. We wish him well.