How do YOU think?

We tell ourselves that when people are faced with making a decision, they would make reasonable, well informed and carefully thought out decisions. Oftentimes, we think (unconsciously of course) that other people think in the same way that we ourselves do. But for the vast majority of time, this is just not how it works. The latest World Development Report explains the three principles of human decision making: thinking automatically, thinking socially, and thinking with mental models. Although these principles are based on recent groundbreaking research from across the social sciences, it is worth emphasizing that the new research, in some ways, brings the discipline of economics full circle to where it began, with Adam Smith in the late 18th century, and to perspectives that were prominent in the early and middle parts of the 20th century. 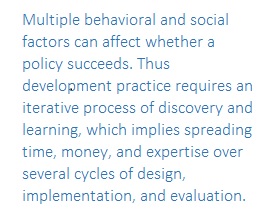 The 2015 WDR highlights that it is not only certain segments of society who would think from their own limited viewpoints. We all do it. In the case of development professionals though, the impact of the ways in which they think, and by extension the way their development interventions are designed runs the risk of doing more harm than good to the target groups, in spite of their best intentions.

The importance of being aware of these biases within the development arena, as donors, intervention designers and implementers cannot be stressed enough. It’s easier said than done, as we all have been molded by many influences throughout our lives, and we automatically think along those lines. But the clichéd phrase “think outside the box” is absolutely essential in ensuring the long term success of the best of intentions held by all of those in the development sector.