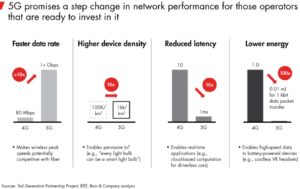 Data traffic in Finland’s Elisa 4G mobile network has grown by more than 20-times from 2011 to 2017 but the operator’s CAPEX and OPEX remained flat during this period. Mobile industry engineers should make their hands dirty, as the Finns do. The bad culture of buying off the shelf solutions to meet internal KPI should be stopped. Engineers are smart, networks are not. And the world will not collapse if it waits until the over-hyped 5G technology gets matured.

Meanwhile, as Donald Trump blames “fake news” to hide the truth, AT&T has reportedly launched “Fake 5G” in America. Ultraright in politics and ultra-wrong in technology seems identical twin. There are, however, sensible exceptions. Marc Allera is one of them. He was chief commercial officer at “Three” when it was the first company that launched a 3G network in Britain in 2003. He was also the CCO at “EE” when it became the first British operator to launch 4G mobile in 2012.

Now, being the chief executive of BT’s consumer arm, he aspires to complete his hat-trick by being the first to hit the button on faster 5G networks. And Marc is mindful about the collective mistakes prior to launching of 3G and lessons being learned from the 4G operations.

“3G technology was overhyped, the price was overhyped and the consumer was underwhelmed by the experience,” he says. “That said, we learnt some valuable lessons, and opened people’s eyes to doing more on their mobile. 3G taught us a lesson in financial prudence while 4G taught us how to deploy rapidly at scale.”

“3G opened people’s eyes to a mobile world beyond voice and messaging, but it wasn’t until 4G that the taps were really opened: data growth took off as the applications emerged, and the performance of 4G fuelled the need to be connected.

“I think with 5G we’ll see this expectation for total connectivity, delivered with a far more intelligent network navigating across fixed, mobile and WiFi, to form a single smart network,” he says.

The telecoms industry also has to move beyond the marketing message that the upgrade just means faster data downloads. “5G isn’t really about speed,” he says, arguing that for the early adopters, it will be about capacity and the ability to target it at the areas most in need, something that was more difficult in the 3G and 4G era. “I’m expecting 5G will see networks transition to being software-defined and cloud-based. This will make them more adaptable, scalable, responsive and reliable than ever before.”