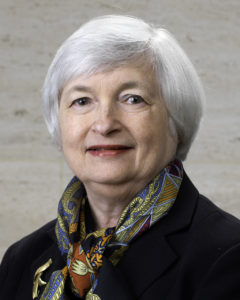 For a number of reasons, I’ve been thinking about Sri Lanka’s unusually low female participation in the labor force. As is common among policy people, I was emphasizing the benefits for households from having multiple incomes and to various sectors from having less constraints on labor inputs. Here, Janet Yellen talks about the macro-economic benefits directly: The sweeping movement of women from the home to the workplace during the mid-20th century, she said, was a “major factor in America’s prosperity.” But that progress has stalled in recent decades, leaving women less likely than men to hold paying jobs. Bringing more women into the work force with policies like expanding the availability of paid leave, affordable childcare and flexible work schedules, she said, could help to lift the American economy from a long stretch of slow growth.

This post is part of series of responses to observations made during a discuss on the “Aluth Parlimenthuwa” show on TV Derana. Read Part I here. In Part 2, I address policymaker misconceptions about the contributions of ICT to economic growth. In the talk show, at around the 29th minute, the policymaker refers to a study that claimed that 10 percent growth in broadband penetration would result in some x percent economic growth. This is most likely the widely cited 2009 econometric study by Christine Qiang and Carlo Rossotto which claimed 0.

The Economist has a nice nuanced discussion on the above question, starting thus: DO DIGITAL economies grow faster than analogue ones? Rich-country leaders seem to think so. G7 and European Union governments are committed to a variety of digital stimulus packages; Australia, the biggest spender, has promised broadband investment of $33.4 billion (or 3% of GDP) to connect 90% of homes at ultra-fast speeds. “Digitisation” involves adopting technologies like wireless phones and internet access to generate, process and share information.

LIRNEasia’s future work will focus on knowledge-based economies, which makes us very interested in stories like this, which place innovation at the center. China’s productivity has been lifted by a massive expansion of private enterprise, and a shift of labour out of agricultural work and into more productive jobs in industry. China’s average return on physical capital is now well above the global average, according to Goldman Sachs. A decade ago it was less than half the world average. Why have the Asian economies led the pack?

Sri Lanka: Telecom’s contribution to economic growth and the impact of taxes

Government has released the 2008 second quarter economic performance data, which shows, again, that the telecom sector is growing the fastest, at 23.2 per cent (as against 21 per cent, 2007 Q2), followed by mining and quarrying at 19.6 per cent. In his weekly newspaper column in the Lankadeepa, Mr Udaya Gammanpila, the Chairman of the Central Environmental Authority and the main proponent of mobile-specific taxes, has posed the question to me why the mobile sector keeps growing even as they keep loading taxes on it.   For example, the mobile subscriber levy of 10 percent of every bill was in effect in 2008 Q2.

Poor economy and taxes begin to bite in Sri Lanka

Hutch, a pure BOP play that was making very good profits, has reported declining profits and revenue growth.  One quarter does not a trend make.  But seen together with Dialog’s bad results for the last quarter, it suggests things are not looking good for the telecom sector which is taking multiple hits with tripled spectrum charges, revenue-raising taxes in the name of the environment and all sorts of additional costs imposed in the name of national security. If the government keeps taking JHU advice, they are likely to make the economy slow to a crawl.