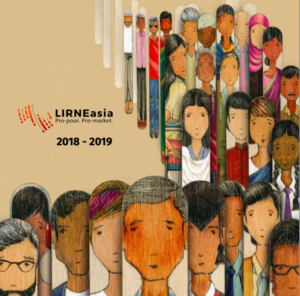 LIRNEasia's Annual Report of Activities during the financial year to March 2019.

Helani Galpaya presented LIRNEasia’s research on platform-mediated work in Sri Lanka, India, and Myanmar at the CEPA Open Forum “Transformative or same-same? The 4th Industrial Revolution and jobs,” organized by the Center for Poverty Analysis. Helani also participated in the panel discussion.

Platform-mediated work: precarious employment or a solution to un/underemployment? (Presentation)

Posted by Nuwan Waidyanatha on  /  0 Comments

Image by StockSnap from Pixabay Much has been already written and debated about the 4th industrial revolution (4IR) and its far-reaching implications on virtually every dimension of human life. Some of the technologies that are central to this revolution include robotics, machine learning, artificial intelligence (AI), nanotechnology, quantum computing, and biotechnology. However, there’s a widespread belief that it will be the Internet of Things (IoT) that will drive the fourth industrial revolution – and it is not hard to see why. A wealth of connected smart devices brings about an explosion in the volume, veracity, and value of available data, which is the precursor to the magic that can be unlocked through machine learning and intelligent predictions. [THE 4TH INDUSTRIAL PROLETARIAT].

Image by Quang Nguyen vinh from Pixabay The Mekong Delta Region is one of the most agriculturally productive regions in the world: it accounts for over half of Vietnam’s agricultural output and more than 90% of its export rice output, which in turn represents about 10% of the global rice market [Core: FEEDING THE BEAST].  However, the region, with its low-lying geography, is also one of the most vulnerable to climate change [Core: THE WRATH OF NATURE]. In fact, a recent delta-wide study has predicted that the entire Mekong Delta will sink underwater by 2100 at the current pace, triggering a large-scale humanitarian crisis. To understand the scope of this crisis, one must trace the Mekong River. It springs from headwaters in the mountainous regions of Tibet and arcs downward, its fruits enjoyed by China and many countries in the Southeast Asian region – including, Myanmar, Thailand, Laos, and Cambodia.

Image by Colin Behrens from Pixabay Ever since the term ‘fake news’ entered the popular vernacular around 2016, it has been a topic of much debate, even leading to changes in legislature. Of course, advocates of free speech and democracy have long criticized the intentions behind such legislature, since they fear that such policies will only add to the toolkits of authoritarian regimes. One fact is unavoidable: fake news is a real problem in the APAC region. During the recent clashes between India and Pakistan, a flood of fake news spread across India containing videos and images that had nothing to do with the incidents. The issue worsened with some mainstream media republishing such content which fuelled a public outcry for military action against Pakistan in the midst of a heated election campaign.

Image by Charlie Wilde from Pixabay Solar power has been growing at an unprecedented pace over the past few years and shows no signs of slowing down.  The International Energy Agency estimates that over the 2018-2023 period, there will be 575 GW of newly added Solar PV capacity – more than all other renewable sources combined. China alone will account for 46% of Solar PV’s growth. At first glance, it is not hard to see why solar energy is popular. Since it directly converts sunlight into electricity through the photovoltaic effect, it has no moving parts; its maintenance costs are minimal (other than keeping the panels clean); and it requires no additional fuel to operate the panel.

Where Have All the Women Gone?

Image by Judith Scharnowski from Pixabay Asia is missing 163 million women. Let us clarify. At 105:100, Asia has long had the highest share of males to females in the population. Had this sex ratio been the same as to the rest of the world, demographers have estimated that Asia’s population would have comprised of 163 million more women than reported. [Core: FEEDING THE BEAST] The effects on India and China are magnified due to the sheer sizes of their populations.