E-gov course for parliamentarians of the Yangon Regional Hluttaw

Over 80 sitting MPs of the Yangon Regional Hluttaw participated in a two day course on e-government organized by LIRNEasia and MIDO. The course took place on 22 and 23 June within the parliamentary premises and saw the participation of representatives from National League for Democracy (NLD), the Military and  Union Solidarity and Development Party (USDP). Rohan Samarajiva and Helani Galpaya of LIRNEasia, Pranesh Prakash of CIS and Htaike Htaike Aung and Yatanar Htun of MIDO made presentations to the MPs over the two days. The presentations were well received and lively discussions followed. Many MPs also visited the digital security clinic for one to one consultations on how they could secure their social media accounts. 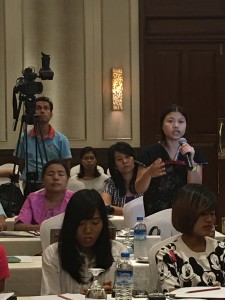 Helani Galpaya presented the findings of the joint research by GSMA Connected Women & LIRNEasia on “Mobile phones, internet & gender in Myanmar” at the Chatrium Hotel, Yangon on 8 April 2016. The event organized by LIRNEasia and MIDO was used as a forum to discuss issues pertaining to gender and ICTs in Myanmar at large. Khin Sandar Win & Htla San Htwe presented the rationale behind and the workings of the UNDP iWomen application while Htaike Htaike Aung of MIDO spoke of the role of women as app developers, hackers and coders. The event was well attended despite it being held on the last working day prior to the New Year Water Festival holidays. Noteworthy was the large media presence, with the event being covered by multiple print, television and online media outlets.

How Business is Done in the Developing World: Deals vs Rules

The Doing Business Report, published annually by the World Bank, analyses laws, regulations and administrative requirements affecting various aspects of private enterprise in 189 countries. Lawyers, judges and notaries are the main data sources for this report due to its focus on legal and regulatory arrangements. This data is used to create a composite index to rank countries based on how pro-business their legal environment is. However, do de jure processes adequately represent the true functioning of an economy? This question is addressed by Mary Hallward-Driemeier and Lant Prichett in their paper, How Business is Done in the Developing World: Deals vs Rules.

A lecture on disaster risk reduction was organized on Thursday 19th June at the Sri Lanka Foundation to consolidate knowledge on the subject in Sri Lanka and share it with other countries, private sector organizations and the general public. The keynote speaker at the event was Dr Stuart Weinstein, Deputy Director of the Pacific Tsunami Warning Centre USA who spoke of the sparse seismic networks and the inadequacies in the tsunami warning system a decade ago. He went on to illustrate the advancements in tsunami warning with the number of warning systems increasing from one to four. Furthermore, the speed at which tsunamis can be detected has improved significantly. (Presentation “Advances in Tsunami Warning Systems Since the Great Sumatra Earthquake of 2004“)  Mr.