What evidence is best to support decisions on information and communication technology (ICT) initiatives? How can we ensure that the evidence comprises the most robust and least biased research?

African goose laying golden eggs is to die in Africa

Call it an African miracle. Eleven years ago mobile money was born in Kenya. Today the service processes one billion dollars every day through 690 million registered accounts, generating direct revenues of over $2.4 billion worldwide. Impoverish citizens without bank accounts enjoy the most secured way to transact through mobile payment systems. 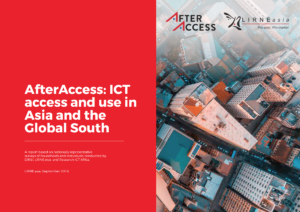 AfterAccess: ICT access and use in Bangladesh and the Global South (Presentation)

Presented by Helani Galpaya and Tharaka Amarasinghe on 2 October 2018 in Dhaka, Bangladesh

Talk at Research for Transport and Logistics Industry 2018 Conference

The slideset used in the speech given as Chief Guest at the closing ceremony of Research for Transport and Logistics Industry 2018 Conference, on 7 July 2018.

APrIGF2018 – Securing continuity and availability of your IOT, beyond malicious hacking

Cybersecurity of developing countries is most at risk! Gartner projects that more than 20 billion IoT devices will be connected by 2020. The security of these Internet Of Things (IOT), relating to cyber security, in a broader sense hinges on service continuity and availability. Whether it be a DDoS attack that affects the availability or a malicious attack on the configuration that brings down the IoT device(s) or exposes private data, they all converge on the concept of cybersecurity. LIRNEasia partnered with Vanuatu Office of the Government Chief Information Officer, Prime Minister’s Office, Netherlands Radio communications Agency / University of Twente and the Internet Society (ISOC) in introducing the Raster Tool and engaging the participants in an IOT cybersecurity assessment exercise.

There is little doubt that China has made achievements in the telecom sector. Their reforms were based on managed competition between state-owned companies. Now we will see the model replicated in a poor country. It will be good to see if it will work. In addition, Prime Minister Abiy Ahmed announced that the state operator would be split in two in order to foster greater competition in the market, saying: “There will be two telecom corporations and shares will be sold in both.

Tatmadaw chief says Mytel is only public operator in Myanmar

Two years ago, when I presented a paper on Myanmar’s policy challenges at the LKY School of Public Policy in Singapore, the key point that came up in discussion was what role of the military would play in the fourth operator. What we speculated is coming true, according to Frontier Myanmar: It is unusual for a country’s military leaders to attend the launch of a telecoms company. But at the launch of Mytel, Myanmar’s fourth telecoms operator, around 50 high-ranking military officers were in attendance, including Senior General Min Aung Hlaing and Defence Minister Lieutenant General Sein Win. Lieutenant General Tran Don, Vietnam’s Deputy Minister of Defence, also attended the June 9 ceremony. Telecom International Myanmar Company Limited, which operates under the brand name Mytel, is 49 percent owned by Viettel, which is wholly owned by Vietnam’s Ministry of Defense.

Google alerted me that a new article had been published on Upgrading Myanmar’s internet connection by the well-funded and hyperactive A4AI. I had the alerts on because I’ve been working in Myanmar since 2012. I was surprised. The article reminded me of what the lawyers in the Attorney General’s Department in Sri Lanka call a balloon opinion. The words are there.

Satellite backhaul in Myanmar: Who is confused?

A trade publication, Satellite Today, has written about an agreement between a satellite provider and the Ministry of Transport and Communication of Myanmar. Under the new multi-year, multi-transponder agreement, Intelsat 39 will host both C- and Ku-band satellite services for Myanmarsat-2, which will enable the government of Myanmar to significantly enhance its existing network as well as the networks of other mobile operators and media companies. This will advance the expansion of affordable, high-speed broadband and internet connectivity to government agencies, businesses and communities throughout the country. It will also support and advance the MOTC’s goal of ensuring that 95 percent of its population will have access to broadband connectivity by 2022. By integrating satellite solutions into its own mobile networks, the MOTC will be able to dramatically increase its overall network bandwidth, speed and reliability as it expands 3G and 4G services into the more remote areas of Myanmar.