The Wrath of Nature 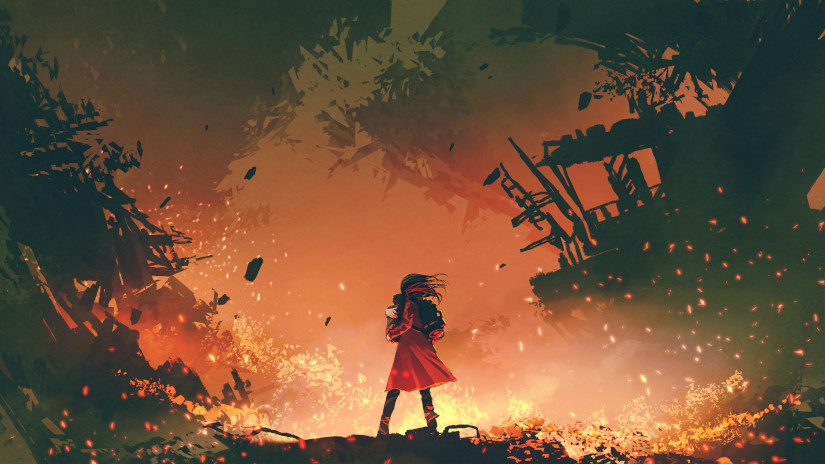 What are the roots that clutch, what branches grow

Out of this stony rubbish? Son of man,

You cannot say, or guess, for you know only

A heap of broken images, where the sun beats,

And the dead tree gives no shelter, the cricket no relief.

The scientific consensus is clear: climate change is real, and humans are the biggest driver of recent climate change. The global symptoms are well-known – sea level rise, increases in surface temperature, glaciers and ice caps melting, and the increasing frequency and severity of extreme weather events. An increase of 4 degrees Celsius would, it is said, challenge food supply on a global scale [Core: FEEDING THE BEAST].

But such statistics and language hide the full weight of the hammer swinging towards humanity. While media and political pundits continue to debate, low-lying Pacific Islands fear that they may be uninhabitable by mid-century [Satellite: CAN THE PACIFIC ISLANDS BE SAVED?]. The IPCC AR5  and the US National Intelligence Council note that the “rice-basket” economies – especially Philippines, Laos, Vietnam, Cambodia, Myanmar, and Indonesia – will struggle at reduced capacity, with grave impacts on food production for each of these countries.  The World Bank believes 800 million South Asians will witness water scarcity crises [Satellite: WATER SCARCITY: A THREAT GREATER THAN TERRORISM].

Meanwhile, the Institute for Global Environmental Strategies (IGES), which has long held a series of national, sub-regional and region-wide consultations with Asian policymakers and other stakeholders, puts things more brutally. As far back as 2008, they warned that the Mekong River flow is projected to drop by 16-24% by 2050. Glaciers on the Tibetan plateau, they noted, were at 500,000 km2 in 1995 – and projected to be at 100,000 km2 by the 2030s. Other notes are increasingly dire: “Floods and droughts will cause diarrhoea all over Asia. Cholera will become a bigger threat than ever before, due to increases in water temperature. The Red (5,000 km2 ) and Mekong (15-20,000 km2 ) river deltas are expected to flood, adding to the 2.6-18.8 million people along the coasts of Southeast Asia who may be at risk of flooding by 2100. Agriculture suffers, requiring increasing amounts of water – between 6% and 10% more with every increasing degree of Celsius in temperature; the increased frequency and intensity of pest outbreaks in forests, and a decline in fish larvae in coastal waters.” More recent research confirms these observations, pointing out that by 2050, saltwater intrusion caused by sea-level rise will cause a production loss of some 240,000 tons of rice from the Mekong Delta [Satellite: MEKONG DELTA BLUES].

This flooding issue isn’t isolated to the Mekong Delta. The three great Himalayan rivers – the Ganges, Brahmaputra, and Yangtze – count some 800 million people living within their flood basins: a full 14% of the world’s population. This population is now at risk.

Paradoxically, there is also the threat of impending water crises due to water shortages. Water availability in India is projected to drop  to ~1,140 m3 /yr by 2050, adversely affecting over 1 billion people. China, which has 20% of the world’s population but only 7% of its freshwater resources, faces a water crisis in its Northern provinces by 2030. It soon becomes clear that the IGES’ point is that the entire APAC region is tilting head-first into hell. 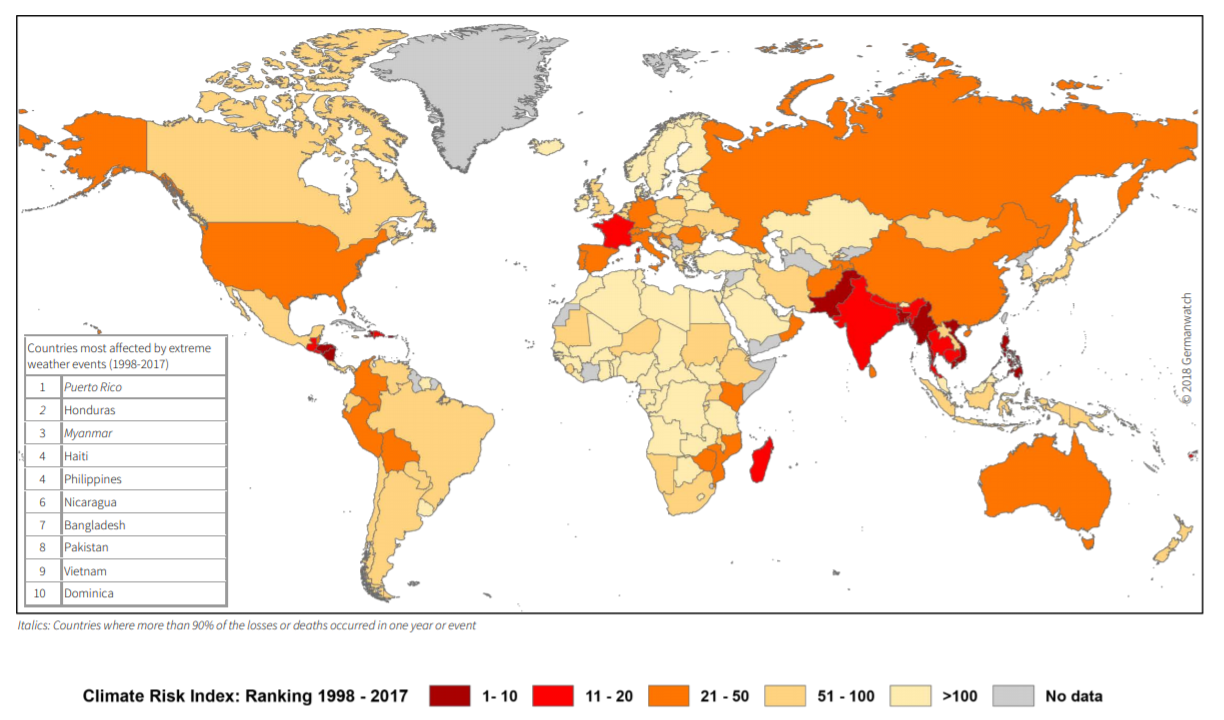 The ultimate verdict is that by 2030, humanity must cut down – reduce its greenhouse gas emissions by close to 50% of 2010 levels, and try to put the brakes on climate change; otherwise, catastrophe is inevitable. By 2100, the IPCC  expects a nightmare of heat stress, storms and extreme precipitation, inland and coastal flooding, landslides, air pollution, drought, water scarcity, sea-level rise and storm surges . This will be our world.

The question now is not about how we save the planet: how do we save ourselves while preserving some degree of progress?  Nature is not one system, but a complex interaction between millions of systems, and facing climate change requires both top-down and bottom-up movements that can meet to engineer a new social order more at peace with our environment. Broadly, three great shifts are required: an overall shift in what we produce; a change in what we choose to consume; and better governance, regulation and finance. Can governments provide the right incentives and deterrents for markets across multiple sectors, and make many investments in infrastructure? What should these moves be focused on – is mitigation possible, or is adaptation a more feasible option?  Can citizens, too, initiate and accept grassroots social shifts that allow for low-carbon economies? And with all of this, can the countries of the APAC flourish as economic entities?

The APAC is in a difficult situation. As a whole, the region is  still struggling to meet the needs of its population [Core: FEEDING THE BEAST] and its growing cities [Core: THE MEGASPRAWL APPROACHES]. Furthermore, economic windows of opportunity [Core: THE NEXT BIG ECONOMY] must be seized. The pressure to cope with these needs has led to unsustainable development practices that are adding their weight to the specter of climate change. Asia’s rising megacities, for example, are hotbeds of extreme pollution and gas emissions, shortening lives by as many as 20 months. Large-scale internal migration from rural and coastal areas into cities is expected throughout Southeast Asia, forcing these issues ever forward. Meanwhile, China, a paradox in sustainable development, continues despite its own policies to push aggressive deforestation, overfishing and dam construction, and will shape the Southeast of the APAC region for years to come. India is equally bad, if not worse. Despite international treaties, countries continue to release toxic substances in the pursuit of growth. These trends show no sign of stopping.

The Bali Action Plan divides this complex issue into four foundations: mitigation, adaptation, technology development and transfer for the above, plus the provision of financial support for these actions. Various countries lie on different levels along these axes. Some are pushing a class of low-tech, highly replicable brute-force solutions that target the reduction of carbon in the atmosphere. Pakistan has already planted 1 billion trees in Khyber Pakhtunkhwa, its northwestern province, and plans on expanding the reforestation scheme [Satellite: CAN 10 BILLION TREES SAVE PAKISTAN?]. Meanwhile, Indonesia, under the Jokowi administration, has measures to reduce deforestation and restorate peatlands, which are some of the most efficient natural carbon sinks on the planet. The city-state of Singapore, which is consciously resculpting itself to be healthier and more biodiverse, is a useful incubator of ideas which cities across the Asia Pacific can draw from, provided they have the funding to do so. Singapore pairs extensive urban design, strict legislation on environmental standards for buildings, and an ambitious target of 80% of its buildings being ‘green’ by 2030. Many of these efforts are for mitigation; the desired impacts appear to be derived from the idea we opened with – reducing humanity’s carbon footprint.

Others push for policy and market shifts that seek to replace contributors to climate change with greener alternatives on both supply and demand. On a macroeconomic scale, the push for circular economies, decoupled from the make-use-dispose model, is making strides both among tech giants and with China. The China Association of Circular Economy  in particular has led the drive to make China an early adopter of this model, , and ripple effects of the circular economy mentality have appeared in large-scale, China-based projects run by international organizations like the Ellen McArthur Foundation, although in general the circular economy remains to be seen as a viable replacement for the present economic structure [Core: THE NEXT BIG ECONOMY].

The unsustainability of fossil fuels has led to a greater drive for nuclear and renewable energy [Core: FEEDING THE BEAST]. Smaller nations with strong renewable mixes, such as Fiji, have leaped to ratify the Paris agreement and plans to generate 100% of its energy from renewable sources by 2030 – although this is easier for Fiji, because it is a small nation starting from a strong hydropower base. Larger nations, like China, are investing billions  n both renewables and in nuclear power. Whether renewables will work out in this timeframe is questionable, but nuclear is a proven technology long since capable of running entire grids. CSIRO agrees, forecasting a 70% growth in nuclear power demand worldwide, positing out that despite fast growth, renewable energy will make only a minor contribution to the world’s electricity needs by 2035.

Then there is the narrative around electric cars, which inevitably pops up in discussions on reducing emissions and changing the transport industry. On the surface, things are happening fast: while Deloitte fears unsustainable oversupply of electric cars by 2030, China is surging ahead to 2030 with policies that hit fossil-fuel-based vehicles and encourages the production of electric vehicles at even lower costs. This would mean that associated markets in the APAC are also more likely to adopt electric vehicles faster, cutting down emissions. A surface question to consider down the line is whether countries can generate enough energy to support this change [Core: FEEDING THE BEAST]. However, a much more immediate question is whether electric cars are actually green at all: lithium mining (the metal used to make batteries for smartphones, laptops and electric cars) is turning Chile’s Atacama region (the second-largest producer of lithium in the word) into a wasteland, destroying water tables and ecosystems and making local residents fear for the livelihoods of their villages. Jason Hickel, economic anthropologist, points out that “to transition the global fleet of 2 billion vehicles to electric will require extracting 24 million tonnes of lithium, with catastrophic ecological consequences.” The solution, clearly, is not more or even alternately powered private vehicles. Resources have to come from somewhere, and this is robbing Peter to pay Paul. 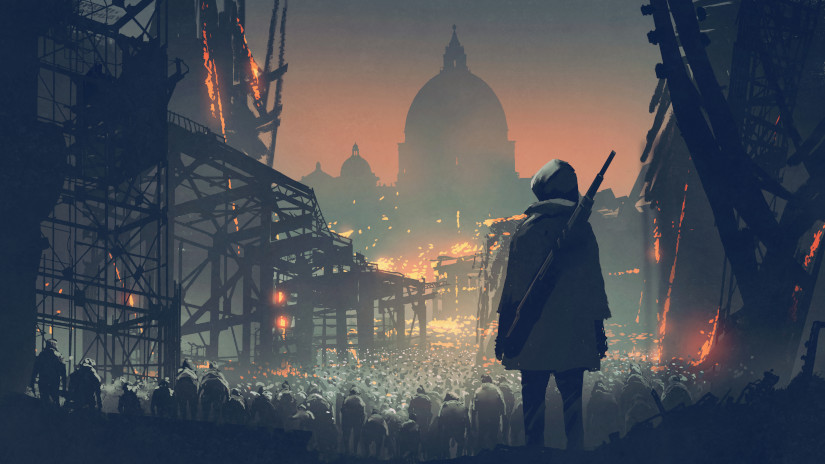 The concern, however, is that this is too little, too late and that we will miss the 12-year window to significant change by 2030.  The APAC region seems rather weak at the issue of adaptation, with large projects in India yielding poor returns. Perhaps the adaptive measures are still in the shaping, as evidenced by the weak signals section; perhaps more investment needs to be put seriously into what happens when we pass critical thresholds. The level of technology transfer is unknown.

Unusually, the threat, scale and scope of climate change seem to generate a number of large scale projects. Like human adrenal reactions, we can divide them into two broad categories: fight or flight.