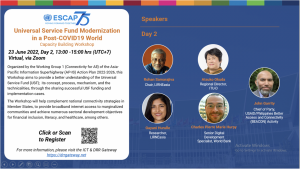 LIRNEasia Chair Rohan Samarajiva and I were invited to share our experiences at a UNESCAP capacity building workshop on Universal Service Fund modernization on 23 June 2022.  Government officials from over 15 countries in the Asia-Pacific attended the two-day programme. Other speakers at the session included Atsuko Okuda (Regional Director, ITU-D), Charles Pierre Marie Hurphy (Senior Digital Development Specialist, World Bank), and John Garrity (Chief of Party, USAID BEACON Activity). In our talk, we discussed (i) how assess the performance of USFs and (ii) how to design good USFs. See our slides here.

Nepal has improved gross Total Disbursement Rate of its universal service fund from 2.6 to 14.5

Impactful utilization required a focus on outcomes: did it achieve the good that was sought to be achieved by the legislation? In general, that would require demand-side studies to see if people had been brought out of poverty, whether employment had been created, etc.. But before one gets to outcomes, it's necessary to have outputs. If the fund has not resulted in the rollout of networks or whatever it was supposed to support, there is not much point in looking for evidence of outcomes, good or bad.

What I communicated to Myanmar decision makers on universal service funds back in 2013, at the start of the reforms

I understand universal service strategy formulation is moving forward in Myanmar these days. I looked back to see what we said four years ago. Can still live with it (though I would add some recommendations based on subsequent thinking). 3. Focus one-off subsidies solely on capital expenditures, to improve targeting and reduce leakages and avoid over-burdening the under-resourced government agencies, namely a.

In its report titled, “Myanmar: Telecoms’ Last Frontier” the Pacific Telecommunications Council (PTC) explores the realities of Myanmar’s telecom environment. The government of Myanmar wants to leapfrog “from 10 (SIMs per 100 people) to 80 in five years.” LIRNEasia’s chair Rohan Samarajiva has concluded his report in this publication: The challenges before Myanmar are many. But, if the mistakes of its neighbors and peers are avoided and lessons learned and put into effect, the target of 10 to 80 in five years can be achieved. While outlining Myanmar’s strategy for Universal Service Fund, Rohan is explicit at the very beginning of his another paper in the same publication: We at LIRNEasia have been critical of universal service subsidies.

I’ve had a running argument with my friends M. Aslam Hayat (one of the creators of the Fund) and Parvez Iftikhar (first CEO of the Fund) about whether it’s possible to have an effective, efficient universal service fund. My position has been that that such a thing can function for a few years, if well designed and with political commitments, but that it’s a matter of time before they go bad. As we used to say when we were designing Sri Lanka’s fund in 2003, when the cheese is out, the rats are inevitable. I have pointed to the successes of the Pakistan Fund in its early years in many of my talks, but I have always qualified the claims being made of its behalf.

Now that telecom networks have a bigger footprint than electric power networks, the question of power sources is assuming increasing importance. Quite a lot of work is being done in our region on reducing the power requirements of base stations and of substituting for expensive diesel generators. In Pakistan, using renewable sources at base stations are mandatory for those obtaining subsidies. The power is also made available for the recharging of handsets. But would it not be wonderful if handsets require no external power and no batteries?

Just a few weeks ago, we highlighted that the Pakistan Universal Service Fund was an exception to the rule of poorly performing USFs that were good at collecting money, but were terrible at spending intelligently. Looking back, there were two reports, not one. The above was written by an Indian journalist. The one written by a Thai journalist went into greater depth, partly because he created a debate between me and the CEO of the Pakistan Fund. Not withstanding, it appears that the Minister wants to drag down the Pakistan Fund to the level of its dysfunctional peers.

ITU said nearly 90 per cent of the world’s population is covered by mobile networks and more than half the rural households have a mobile telephone today. While focusing on Bangladesh, the World Telecommunication/ICT Development Report 2010 further says: Grameenphone’s EDGE network, launched in 2005, covers 98 per cent of the population, so almost every Bangladeshi has potential access to the Internet. Grameenphone has over 4.5 million EDGE subscribers, making the company the largest Internet service provider in the country. The above statement in page 23 of the ITU’s report refers to Grameenphone’s February 11, 2009 press release.

The Bangkok Post has carried a report on the exchanges about universal service funds at the Islamabad Mobile 2.0 Expert Forum. The reporter initiated the exchange between the CEOs of the Pakistan universal service fund and LIRNEasia. Here is his account. Rohan Samarajiva, CEO of Lirne-Asia, has been a long opponent of USO funds and has often stated that they are a waste of money which distort the market, and that USO-type projects should be funded from central budgeting process instead.

___________________________________________________ Mobile 2.0 describes the next wave of applications and services – the use of mobiles for more than voice. On the 26th and 27th of April 2010, LIRNEasia together with the PTA co-hosted a successful expert forum in Islamabad, Pakistan. A multitude of themes were discussed over the four sessions, when the experts presented their research and cases to an audience that consisted of those representing regulators, mobile operators, government agencies and the media from nine countries of the Asia Pacific region. Day 1: Opening Session Welcome Speech I: Prof.

US Universal Service Fund to disburse subsidies for broadband

The US universal service fund is among the oldest and most inefficient, spending more on administration than comparators and not targeting the subsidies well. Our research has been cited in debates about improving it. The FCC under the Obama appointed Chair does not appear to be engaging in fundamental reforms, but is instead seeking to use the Fund as the main vehicle for executing its broadband plans. Instead of repurposing the existing funds, it is raising additional money by taxing customers of the telcos. Chief among its goals, the F.

We reproduce fully below, Carlos A. Afonso’s post to a thread on Computer Professionals for Social Responsibility responding to discussions at the IGF workshop “Expanding broadband access for a global Internet economy: development dimensions”, in which Rohan Samarajiva, Chair/CEO LIRNEasia was the keynote speaker. We retain the original title. As neither we nor most of our readers do not have access to the thread it was posted, we like to continue the discussion here. __________________________________________________________________ Hi people, I come from one of the ten largest economies in the world, with nearly 200 million people, 8.

Universal service funds un/misspent? No problem, we’ll find something for bureaucrats to spend it on

I am writing this sitting at an IGF session dealing with the twin themes of access and diversity. Learning new and useful things about making websites accessible to differently abled people which should have important implications for the design of mobile terminals that will make more-than-voice services more accessible to those lacking knowledge capital. The danger of course is the money question. When the many well meaning people who work on disabled access issues look around for money to advance their causes, they first look to government. And where in government?

Some of our best friends are at in the Association for Progressive Communication (APC), but still warms our hearts when they quote our writing, especially when we go out of our way to wave the red flag before those who still believe in the benevolent state. In a submission to the UN Group on the Information Society, they frankly debate the wisdom of continuing with universal service funds, among other things, quoting us: Rohan Samarajiva of LIRNEasia suggests in a recent paper that explores the success of the ‘budget telecom network model’ in South Asia that ‘the idea of making universal service transparent by creating universal service funds …was a good idea in its time ..but experience suggests that it is an idea that has run its course’. He identifies two problems: Billions of dollars of universal levies lie unspent in government accounts.

LIRNEasia’s 2005 research on India’s Universal Service Obligation (USO) policy, conducted by Payal Malik and Harsha de Silva, has been cited in a presentation  to the US House of Representatives, in March 2009. The paper presented, entitled, “Using Competitive Bidding to Reform the Universal Service High Cost Fund”, can be downloaded here. As a policy-oriented organization, we are indeed pleased that our research is being used to influence policy, not just in emerging Asia but in other regions as well. LIRNEasia’s paper, “Diversifying Network Participation: Study of India’s Universal Service Instruments” can be downloaded here. More on the study can be found here.