Viktor Mayer-Schonberger and I have been debating privacy since the early 1990s. We both had chapters in Technology and Privacy: The New Landscape, which remains a seminal book on technology and privacy, published in 1997. Just last month, we continued our conversation at IGF in Bali. He was not so forthright in Bali, but now he is putting into words what we have been kicking around in our internal discussions. At the just-concluded IAPP Data Protection Congress in Brussels, the audience heard a bold proposal from closing keynoter Viktor Mayer-Schönberger: “The naked truth is that informational self-determination has turned into a formality devoid of meaning and import.

I did not realize this was a big deal until I heard several people including references to writing entries for the International Encyclopedia in the short 2-3 minutes they were allowed for self-introductions at the recent IDRC Information and Networks Partners’ meeting in Cape Town. It’s been some time since I had opened an encyclopedia. I thought that Diderot’s and d’Alembert’s insane (but typically French) idea of codifying settled knowledge had for sure been permanently buried by the Internet and Google. But no, apparently the scholarly industry and the inherent conservatism of the university will keep it going, at least for a few more years. Anyway, it was not difficult or painful.

Do tax and levy contributions to governments by mobile telecom companies exceed their investments?

We all know the importance of investment in dynamic ICT markets. No investment: no new services, poor quality of service . . . As LTE is being rolled out and the conversation on 5G is gathering momentum,one would think the relationship between investment and taxes would be different from what is being reported as being paid by Vodafone: During the 2013 financial year, in which the group reported pre-tax profits of £3.

Have people’s relationships with their phones changed qualitatively since 1979?

This was a central claim in the highly significant ruling made by Federal District Court in Washington DC: In a 68-page ruling, Judge Leon said the N.S.A. program that systematically gathers records of Americans’ phone calls was most likely unconstitutional, rejecting the Obama administration’s argument that a 1979 case, Smith v. Maryland, was a controlling precedent.

Fierce competition has prompted the operators in Israel to jointly build 4G networks, according to Reuters: Under the deal, the three operators will cooperate in obtaining frequencies for the 4G network, which will be built and operated by a newly created entity equally owned by Cellcom and Pelephone. Each operator will be required to purchase and operate its own core network and costs will be divided equally among the three operators, subject to certain conditions and limitations set in the agreement, which is for 15 years. Subsequently Reuters has also reported that Reliance and Airtel have agreed to do the same in India. In fact, they have widened the scope of sharing way beyond the mobile networks. The two companies will share inter and intra-city optic fibre network, submarine cable networks, towers and internet broadband services.

From LIRNEasia to the people of the Philippines

Last week LIRNEasia, its staff, members and members of its scientific advisory council banded together to collect USD 1250 towards the relief efforts in the Philippines.  The money was channeled towards a charity that provides medical aid to the victims of the super typhoon Haiyan. Haiyan is estimated have taken the lives of over 5000 people in the Philippines, and impact the lives of millions more.

Demystifying infrastructure for broadband in Asia 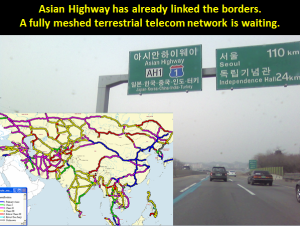 I have been asked to present at the “Expert Consultation on the Asian information superhighway and regional connectivity” in Baku, Azerbaijan. Here is my presentation: Unleashing Infrastructure Synergies Across Sectors.

Enlightened self-interest: How can big business contribute to inclusive development

Last week I had the opportunity to speak to the leadership (200+) of one of Sri Lanka’s largest conglomerates at their quarterly meeting. I decided to anchor my talk on research LIRNEasia had conducted over the past years that had relevance to the company. We had drawn inspiration from a finding of the Growth Commission, co-chaired by Michael Spence, in developing our research. This was on the importance of connecting to global value chains. It is difficult for a smallholder or a micro enterprise to connect to a global value chain directly.

Finally, a positive innovation story from a developed-country telco

When US competition regulators turned down the AT&T-T-Mobile merger, many thought that would be the end of T-Mobile. Instead, it was the end of business as usual. T-Mobile branded and marketed all this as the “Un-carrier,” rolling out new versions of its plans — already five and counting — even as competitors have struggled to match the previous one. “Surprise is an effective competitive tactic,” Mr. Legere said.

The next stage of big data: On the road to Minority Report

A new robot equipped with multiple sensors that can collect information from its surroundings that can be matched against “big data” streams has been announced. The facts are interesting. Even more intriguing is the allusion to Minority Report. K5 also raises questions about mass surveillance, which has already set off intense debate in the United States and Europe with the expansion of closed-circuit television systems on city streets and elsewhere. The Knightscope founders, however, have a radically different notion, which involves crime prediction, or “precog” — a theme of the movie “Minority Report.

Big government administered projects always have a hard time getting rolling. Ask the Australians. We wish the Indian DoT the best in achieving incredible acceleration. The government has provided broadband connectivity to only 60 gram panchayats till now under the Rs 20,000 crore NOFN project, which has to cover 2.5 lakh panchayats by September 2015.

Under Sri Lanka’s law, if an operator goes out of business, the Director General of Telecom has to run it. This used to be one of my nightmares. I knew how to regulate, but did I know how to run a company? The Daily Star paints a grim picture of Citycell, a Bangladesh CDMA licensee. So grim that I should feel sorry about reiterating criticism of the discounting of their payments by the government when the licenses were up for renewal.

The age-old attraction of spy agencies to communication facilities

To me, the biggest question arising from the Snowdon affair is why everyone is acting so surprised. “Everyone was so focused on the N.S.A. secretly getting access to the front door that there was an assumption they weren’t going behind the companies’ backs and tapping data through the back door, too,” said Kevin Werbach, an associate professor at the Wharton School.

The much anticipated Myanmar Telecommunications Law (Law 13 of 2013) was approved by both houses of the Myanmar Legislature and was given Presidential assent. Our analysis of the law is not yet complete, but here are some first thoughts: There is considerable and unnecessary overlap of powers and functions between the Ministry and Department. Positioning the Ministry as the authority to appeal departmental decisions may make it the de facto regulator. This goes beyond the usual concern about the Ministry also having responsibility for the incumbent operator MPT. The explicit authority given to the Ministry to clarify technical terms in the law appears to position it as a supra regulator even after the promised creation of the independent regulatory authority.

How the world changed because of the mobile

I keep telling people that I (and the people associated with reforms in South Asia in the late 1990s) had no expectation that we would achieve the levels of voice and data connectivity that we have now achieved. But here is the proof, from a piece I gave to UNESCO while still Director General of Telecommunications back in 1999. In most countries of the South, basic telecommunication connectivity is still a distant goal, leave alone the advanced Internet infrastructure that provides the basis for electronic commerce. Electronic transactions between companies and organizations, particularly those involved in worldwide commercial relationships, do take place within the context of Electronic Data Interchange (EDI). However, these closed user systems do not fall within the commonly understood meaning of electronic commerce that involves transactions with consumers in an open system such as the Internet.

Trust as the key ingredient

Even when one disagrees with a speaker, one can learn from the engagement. I enjoyed myself at the talk given by Futurist Gerd Leonhard at ITU Telecom World, partly because I was actively engaging his stream of consciousness by tweeting. One thing I agreed fully with was his emphasis on trust: As the tweet said: “If you are in ICT Business & don’t have trust, you will be out of business in 5 yrs. Futurist at #ituworld” This caused me to dig through some old writing. Here is what wrote back in 1999 in a UNESCO publication: The overall environment of a society has an impact on how its members approach electronic commerce.