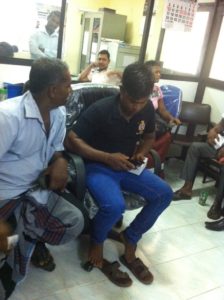 For some, it’s something they are used to. But for others it’s a new experience. They carefully touch the icons on the smart phone with tentative fingers and say “Puthalata, duvalata nang meva pulavan” (Our sons and daughters can easily do this) The group of farmers who gathered last week in Dambulla came from different areas in the Matale and Anuradhapura districts. Some had travelled long distances. They were a diverse group – ranging in age from twenties to fifties.

LIRNEasia researchers were in the field last week talking to vegetable farmers in Chilaw, Gampaha and Kurunegala. The discussions which took part in varying locations, are part of the LIRNEasia’s ongoing research for its ‘Inclusive information societies’ project. The project aims to assess the impact of opening up government data and making crop advisory information available to farmers through a mobile application. Initially the app will target farmers who grow cucurbits for export. Research work for the project is now underway.

While the rest of the Sri Lanka slept peacefully, a considerable number of young and enthusiastic programmers gave up sleep this weekend – but for a good cause. Anyone dropping in to the WSO2 offices in Colombo the early hours of Saturday or Sunday morning would have been greeted by the sight of exhausted but determined coders hunched over laptops, tapping away. Among them were three teams working on a problem put forward by LIRNEasia. This was the scene of the Code4good hackathon which started on Friday evening (18th) and ran non stop until Sunday evening. Though the intense work happened this weekend, preparation began much before.

Mobile 2.0 research findings to be disseminated in Delhi, Dhaka and Bangkok

We now have evidence to support the claim that those at the “Bottom of the Pyramid” (and therefore, the majority of people in the developing world) are likely to enter the world of knowledge and convenience promised by the Internet through the path opened by the rapidly increasing capabilities of mobile networks and user devices. Mobile 2.0 describes the use of mobiles for “more‐than‐voice”. Mobiles are increasingly becoming payment devices which can also send/process/receive voice, text and images; it is envisaged that in the next few years, they will also be fully capable of information‐retrieval and publishing functions, normally associated with the Internet. Mobile 2.