Trade unions are supposed to level the playing field for workers. But it’s something else that happens with unions in monopoly services provided by government. They engage in what is very close to extortion. Government doctors in Sri Lanka go on strike, harming innocent patients, demanding and getting privileged access to popular schools for their children and duty exemptions for the cars they buy. Railway workers demand salary increases even when the losses exceed total revenues.

We have been writing about network shutdowns for a long time. We even formulated a law to explain its workings. Now finally a court has ruled: The judgement reads as, “For what has been discussed above, the instant appeal and the connected petitions are allowed. Consequently, the actions, orders and directives issued by the Federal Government or the Authority, as the case may be, which are inconsistent with the provisions of section 54(3) are declared as illegal, ultra vires and without lawful authority and jurisdiction. The Federal Government or the Authority are, therefore, not vested with the power and jurisdiction to suspend or cause the suspension of mobile cellular services or operations on the ground of national security except as provided under section 54(3).

ICT accessibility for persons with disability for members of Parliament: Event report

USF money being used for connectivity in India's North East

Better late than never. Why it took multiple decades after the establishment of the Universal Service Fund to spend the money to connect the unconnected in India’s North East is the question. It’s not that there was a shortage of money. Bharti Airtel Ltd will set up 2,000 mobile towers across villages and national highways in the North East with the help of government funding, the company said in a press statement on Sunday. The telecom operator has signed an agreement with the department of telecommunications and the Universal Service Obligation Fund (USOF) to provide mobile services in 2,100 villages across Assam, Manipur, Mizoram, Nagaland, Sikkim, Tripura and Arunachal Pradesh over the next 18 months.

Public lecture at the University of Philippines

While in Manila for an APCICT-UNESCAP expert group meeting (6-7 Dec 2017) to provide input into a course module on data driven smart government, I had the pleasure of also delivering a public lecture on big data for development. The lecture was held on 8 Dec 2017 and was sponsored by the Center for Local and Regional Governance (CLRG) of the University of Philippines’ National College of Public Administration and Governance (NCPAG). The two events and in particular the public lecture was a useful opportunity to interact with diverse stakeholders such as civil servants, government officials from DICT (Philippines’ apex ICT government body and regulator), and university faculty regarding the enhanced use of data in policy making. My slides from the event are HERE.

Following Beniger, I have pointed to the need for control in soft sense as the driver for much of what is going in ICTs these days. But is China understanding control in a hard sense? China Telecom showed off its ability to measure the amount of trash in several garbage cans and detect malfunctioning fire hydrants. Investors and analysts say China’s unabashed fervor for collecting such data, combined with its huge population, could eventually give its artificial intelligence companies an edge over American ones. If Silicon Valley is marked by a libertarian streak, China’s vision offers something of an antithesis, one where tech is meant to reinforce and be guided by the steady hand of the state.

Governments want to be seen as doing things. A government that does things is not necessarily better than one that does little or nothing. It is important that the government takes actions that are well considered both in terms of causing the intended results and in terms of not causing unintended harm. The benefits must also be balanced against the costs of the policy action. I examine the proposal to impose a 0.

We have been talking about the absence of clear market-exit rules in the countries we work in. The examples keep piling up. Indian operator Aircel may have no other option but to shutter its operations following the collapse of its merger with Reliance Communications (RCom). The operator has debts of around US$3.7B and continues to make losses.

When search is not that important

Google’s core competence is search. But the millions now joining the Internet in India and similar countries do not appear to value search as much as the early adopters, according to company research. So Google is offering other products specifically designed for the Indian market, according to NYT: Many of the new Indian users have basic phones, which make it difficult for them to run certain apps or to store big files like videos. Data plans are limited, and despite a telecom price war that has cut the price of a megabyte of data by as much as 97 percent, some customers are unable to afford more data when they run out. Google’s Android software and apps like the Chrome browser, Maps and YouTube are often included with smartphones.

Fourth operator in Myanmar wants to be first

Mytel, the fourth entrant in the Myanmar market, aims to be first. According to them, the question is not whether, but when. The fourth telecom operator, Myanmar National Tele and Communications Co Ltd (Mytel), said its investment has reached to about US$1 billion (1.36 trillion kyat) including the license fee in Myanmar. The telecommunication sector has the highest level of foreign investment.

Birth centenary of a visionary

Celebrations of the birth centenary of Sir Arthur C. Clarke will take place across the world, including Colombo where he lived and died, this month. Sriganesh Lokanathan will be speaking on Future Data at the Colombo event. Yudhanjaya Wijeratne, our resident SF writer, is also playing a role. I thought of contributing to the celebrations with this eulogy I wrote for the now-defunct Montage back in 2008: Sir Arthur C.

Two thirds of Americans get some news via social media. Has to be higher in Myanmar

Just a few days ago, I wrote about an Australian scholar expressing skepticism about the importance of Facebook as a news channel. I referred to Pew Research on the subject from 2016. Now the 2017 results are in: As of August 2017, two-thirds (67%) of Americans report that they get at least some of their news on social media – with two-in-ten doing so often, according to a new survey from Pew Research Center. This is a modest increase since early 2016, when (during the height of the presidential primaries) 62% of U.S.

Shazna Zuhyle, a researcher from Colombo-based LIRNEasia, a regional policy research body will chair an International Telecommunication Union expert group meeting. The 8th meeting of the Expert Group on Telecommunication/ICT Indicators will start on September 12 in Geneva. It will consider a revision to the current data, messaging and voice price benchmarks, which are used by international organizations to rank countries and built composite indices to measure development goals. EconomyNext report.

What does it take to become a learning organization? 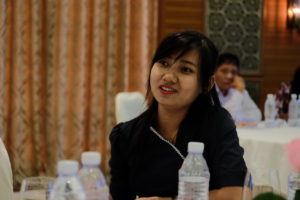 Yesterday, we were discussing how a regulatory agency could become a learning organization. I was thinking of a parsimonious indicator. Why not resources spent on learning/training activities? How much did the organization spend on activities associated with training/learning? Actual money spent on fees, travel, per diems etc.

Christoph Stork of Research ICT Africa/Research ICT Action gave a master class in how to communicate complex research findings to policy makers, based on the policy briefs submitted by the presenters in the CPRsouth 2017 Conference Session 8 “ICTs to achieve broader public-policy objectives.” Here is the slideset.