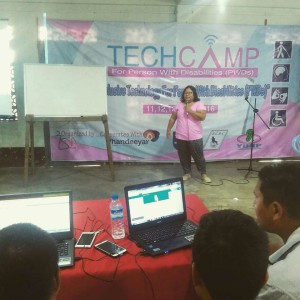 This past week, a three-day tech camp for persons with disabilities was held in Yangon. Around 50 participated in this tech camp representing different disability organisations. Half of the participants were from Yangon, while the rest of the participants were from other areas of Myanmar.   Htaike Htaike Aung of MIDO, with help from our invaluable disabilities  consultant Nirmita Narasimhan, made a well received presentation on how ICT applications in the local languages can be used to make persons with disabilities (any disability) more independent. This was a continuation, and one of the most gratifying outcomes, of Nirmita’s work in Yangon a few months back during which both Htaike Htaike and I received a superb training in how ICTs can be used to make information societies more inclusive.

Multinet Pakistan, an Axiata company, and state-owned Omantel are deploying a new subsea cable system, dubbed Silk Route Gateway (SRG-1). It will have two pairs of fiber with a design capacity of 10 Tbps each. The system will be commercially launched by the end of 2017. The SRG-1 will stretch over one thousand kilometers between Muscat and Karachi, with a planned extension to link the newly built deep-sea port at Gwadar (Pakistan). That will make it the country’s first submarine cable with double landing stations.

When governments do it, it’s called censorship. But when companies do it, it’s only problematic. Back in 2007, Verizon declined to give Naral Pro Choice America a short code so their supporters could receive texts (this was long ago, before smartphones). Verizon was a common carrier. It was licensed.

Few days back, I was part of a panel discussing the Sri Lanka RTI Bill that has gone through Constitutional Review. This was on Rupavahini, the government-owned channel. The Deputy Minister in charge of shepherding the bill through Parliament and a lawyer who had intervened in the Constitutional Review were the other members. The first time I engaged with the topic was in 2007. Then I went into high gear in 2011.

“The Think Tanks and Civil Societies Program (TTCSP) at the University of Pennsylvania conducts research on the role policy institutes play in governments and civil societies around the world.” In its latest report LIRNEasia was listed under the category “Top Think Tanks in Southeast Asia and the Pacific” along with IPS, RCSS and CEPA from Sri Lanka and was only South Asian think tank to be listed under “Best Policy Study-Report Produced by a Think Tank ” which was focused on our work in Big Data for Development. We were the only Sri Lankan entity to be listed “Best Independent Think Tanks” in an unranked list of 144 global think tanks. The TTCSP works with leading scholars and practitioners from think tanks and universities in a variety of collaborative efforts and programs, and produces the annual Global Go To Think Tank Index that ranks the world’s leading think tanks in a variety of categories. This is achieved with the help of a panel of over 1,900 peer institutions and experts from the print and electronic media, academia, public and private donor institutions, and governments around the world.

The 80 percent and 160 percent increases in taxes on voice-SMS-VAS services and data, respectively, caused me to write an oped anchored on one instrument of public policy, use of fiscal means to discourage use of demerit goods. I wish to make clear that there is nothing wrong with subjecting telecom services to normal taxation such as VAT and NBT. Many years ago, that was the case. But over time various additional levies were layered on top, taking the overall tax burden to around 32%. Around 2009, the previous Government rationalised the mess, exempting telecom services from general taxation while imposing a single telecom levy.

Bangladesh simultaneously exports and imports Internet bandwidth to and from India. Its geographic location and state of international connectivity have contributed to this interesting scenario. The first submarine cable (SEA-ME-WE4) was landed at Cox’s Bazar in 2005. This facility of Bangladesh Submarine Cable Company (BSCCL) has dramatically improved the country’s overall international connectivity. Yet, the industry remained nervous about outages due to maintenance or accidental snapping of SEA-ME-WE4.

Few days back, I had a Twitter exchange with a journalist about news. "More than one-sixteenth of the average user’s waking time is spent on Facebook" https://t.co/mLtxgxcbc2 — Rohan Samarajiva (@samarajiva) May 7, 2016 @ChandaniKirinde Primary srce of news for 18-24 grp in #LKA WP is Facebook, acc repre survey. Unless u consdr news unproductive . .

There is doubt whether the fourth operator can mount a credible entry, given delays that are a necessary feature of 13 partners being involved. But they are supposed to have a trump up their sleeve: the military, which is a partner through Star High Public, may give the yet-to-be-named fourth operator exclusive access to military sites for their towers. This seems anti-competitive, on the face. But because the regulator and the competition authority are not in place, they may get away with it. Three telecom companies, including Myanmar National Telecom Holding Public Ltd, Star High Public Co Ltd and Viettel from Vietnam are negotiating a business plan to form the fourth telecom company to operate in Myanmar.

The government-owned Sunday Observer has carried a story on the unraveling of the previous tax regime affecting telecom services that makes reference to the findings of our Systematic Reviews. “This will be the highest tax ever imposed on telecom users in the country. It is likely to reduce telecom use, especially of data. It is contrary to government policy seeking to encourage internet use,” Prof. Samarajiva said.

Internet is the new oil

Our quest for laying optical fiber along the 143,000 kilometers of Asian Highway dates back to 2011. The objective is to liberate Asia’s increasingly digitized cross-border economy from exclusive dependency of submarine cables. Blending the overland and undersea telecoms infrastructure to solidify the continent’s competitive edge has been central to our mission. Thankfully the ESCAP, which fosters Asian Highway, has listened to us. Now it leads the Asia Pacific Information Superhighway (AP-IS) initiative.

Senior Research Fellow Payal Malik has co-authored an op-ed on surge pricing in the taxi market that addresses some key issues of platform markets. The distinguishing feature of platform markets is the lowering of transaction costs through the use of ICTs. State action to prohibit such applications is retrograde. Instead, what should be done is to remove no-longer-justifiable constraints such as rigid and limited issuance of licenses. The state fixes two parts of the taxi market.

It appears state-owned enterprises (SOEs) have risen in salience in Sri Lanka recently. I am giving a keynote address on this topic at the launch of the Advocata Institute. The slideset that I will be using is here. The day before yesterday, I was debating on a TV talk show what should be done with the least defensible of the SOEs, the renationalized SriLankan Airlines and the misbegotten Mihin Lanka. It is interesting that the successful reform that I was associated with, telecom, keeps coming up in these discussions.

Yes to VAT, no to industry-specific taxes that treat telecom like tobacco

I was asked to comment to the state-owned Sunday Observer on the Sri Lanka government’s decision to extend value-added taxes to the telecom industry. Below is my response. I have always taken the position that telecom services should be treated no differently from other goods and services. Therefore, I do not object to making telecom services subject to VAT. The problem is with the approximately 25 percent mobile levy.

Yesterday, a report entitled Rebuilding Public Trust was launched at a meeting attended by the Prime Minister, the Leader of the Opposition, the Media Minister and his Deputy. I contributed to the report, primarily on policy and regulatory recommendations, not all of which were accepted, as is normal. My responses will be published shortly. But I was pleased that the report made several references to LIRNEasia research, below being one example. LIRNEasia’s Teleuse@BOP research in Sri Lanka and other emerging markets in Asia have proved useful in making government understand the significance of telecom, especially the mobile, at the Bottom of the Pyramid.