With the support of International Development Research Center (IDRC) of Canada, LIRNEasia in partnership with Indian Council for Research on International Economic Relations (ICRIER) and Vihara Innovation Network studied Online Freelancing: Challenges, Opportunities and Impact in India. The dissemination workshop of the findings of this research was held on 27th of December 2017 at the India Habitat Centre, India. Government and private sector officials of skill development and employment generation organizations participated at this workshop. Dr. K.

50% of Millennials open to non-traditional forms of employment

Millennial Careers 2020 Vision: Report by Manpower group highlights, Though Millennials favor full-time work, over half say they are open to non-traditional forms of employment in the future—freelance, gig work or portfolio careers with multiple jobs. Self-employment is also a tempting future option. This is based on a quantitative research across 25 countries surveying 19,000 Millennials. They asked what they look for in a job, what development opportunities they seek and what would make them stay with an employer.   Here are some key findings of the survey, Seventy-three percent report working more than 40 hours a week, and nearly a quarter work over 50 hours.

Why does the government have to do everything?

I am sitting here at a World Bank consultation on setting priorities for Bank lending in 2017-22. I was shocked by some of the comments, an example being: why isn’t there government-provided training for BPM? It seems that people are still stuck in government-centric thinking. What is the track record of government in providing training for globally-competitive industries? It has been a spectacular failure, except perhaps the case of the German Tech Institute, which is an extraordinary resource for Australia. 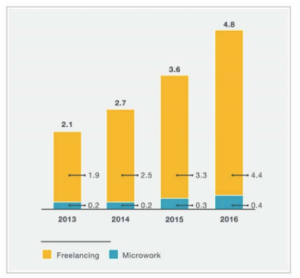 Manila retains its second position among the top-ten BPO destinations worldwide. It remains ahead of Mumbai, Delhi, Chennai, Hyderabad and Pune but ranks behind Bangalore, according to consultancy Tholons. The rapidly growing BPO industry now represents 6% of Philippines’ GDP and rivals remittances from migrant workers as the country’s largest revenue generator. BPO sector employs more than 1m people and the industry’s revenues, which currently stand at $18bn, could reach $25.5bn in 2016.

Freelancing provides a reliable source of income with flexibility to the self-employed, those who are not part of a large organisation or for a person unable to work full time. This also provide a platform for unemployed youths and married women with small children to make an earning and thereby increasing inclusive growth. Payoneer, a financial services business that provides online money transfer and e-commerce payment services recently conducted a study among freelancers within 180 countries. Objective was to determine the average hourly rates charged by freelancers based on several factors. Payoneer’s Survey results were collected from the responses of 23,006 freelancers worldwide through an online questionnaire during November and December 2014.

Not bad for a young industry. But I do hope the results of the survey will be disclosed quickly and with breakdowns of export and domestic earnings and employment. Last time it had to be extracted in dribs and drabs. “Sri Lanka has launched an ICT value survey to find the national hi-tech exports it achieved in 2013/14.” the minister said in a statement.

The states in the North East of India have among the highest rates of English literacy in India. They also have very high unemployment rates. Now the government is planning to conduct least-cost subsidy auctions for those willing to set up BPOs in those states. As per the plan, the government is planning to set up BPOs, with a total of 5,000 seats, in Assam, Manipur, Tripura, Meghalaya, Nagaland, Arunachal Pradesh and Mizoram. The government has set aside a budget of Rs 50 crore for the projects, which would be set up under private-public partnership.

How one policy mistake can lead to more if not careful. The case of Bhutan

Bhutan built an IT Park in a nice location between the principal city and the airport. The promise of those who put this project, funded by the World Bank, was that Bhutan would attract foreign BPO firms to Thimphu to create white-collar jobs for young people. In turn, it is possible that they had received assurances from several large IT & ITES firms in India that they would set up operations in Thimphu. Anyway, the agreements were signed and the IT Park built. But no one came [Correction: Not as many as expected came; there are two companies at the IT Park].

In May 2007, I made a presentation to high-level committee appointed by the government of Bangladesh to recommend reforms to the way international telecom traffic was handled. I neglected to spell out what BPO stood for. “What is BPO” was the question from the audience. Seven years later, Bangladesh is ranked 26th in the AT Kearney Global Services Location Index. That is great.

Claims of major progress on IT and ITES in Sri Lanka

In 2011 I analyzed some earnings and employment data and initiated a debate on the health of the Sri Lanka IT and ITES sector. Links to the first and second columns. It appears that new data has come to light (though a source is not given and no reference is made to the sector study by the Export Development Board that I referred to in 2011). “As an industry, we made significant progress over the last five years. Our export revenue grew from $213m in 2007 to an estimated $600m in 2013 (182%).

The new world of online work

Thought-provoking piece, based on company-survey data, about how place is becoming irrelevant to work. BTW, the tax principle that Bangladesh is praised for was implemented in Sri Lanka maybe five years ago. The online work is already changing how some governments think about labor. Last May the government of Bangladesh decided to classify online work as export-related commercial income, free of taxes, instead of as a taxed offshore remittance. The idea, Mr.

What are the low hanging fruit in Myanmar?

Daw Aung San Suu Kyi was in Bangkok for the World Economic Forum. One of the questions she was asked was “what sectors she would look to promote first?” The summary of her answer was that the telecom sector is important as the need to have mobile phone for development is real and will look to support advancement in this field. She wants to target what she calls “low-hanging fruits” sectors to create jobs and bring Burmese migrant workers home. There is no doubt that telecom, especially voice and data communication over wireless platforms, is a low hanging fruit.

Why Filipino BPO workers earn more than their Indian counterparts

Entry level BPO workers in the Philippines earn USD 300 a month, 20 percent more than the USD 250 their counterparts earn in India. Why? In addition to language skills, the Philippines has better utility infrastructure than India — so companies spend little on generators and diesel fuel. Also, cities here are safer and have better public transportation, so employers do not have to bus employees to and from work as they do in India. Full report.