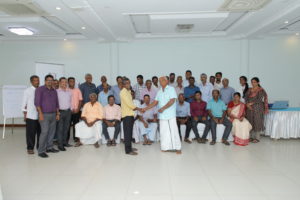 On the 1st of November, the LIRNEasia team travelled to Jaffna with some southern farmers (who already sell their products to the export market), exporters and experts in agriculture. For some of them, this was their first visit to Jaffna. 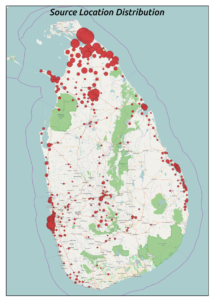 by Keshan de Silva and Yudhanjaya Wijeratne One of the most useful datasets we have is a collection of pseudoanaonymized call data records for all of Sri Lanka, largely from the year 2013. Given that Sri Lanka has extremely high cell coverage and subscription rates (we’re actually oversubscribed – there’s more subscribers than people in the country; an artifact of people owning multiple SIMS), this dataset is ripe for conducting analysis at a big data scale. We recently used it to examine the event attendance of the annual Nallur festival that happens in Jaffna, Sri Lanka. Using CDR records, we were able to analyze the increase in population of the given region during the time of the festival. A lengthy writeup describes it on Medium, explaining the importance of the festival and the logic for picking it.

Talk in Jaffna on ETCA and global production networks

On Thursday, 04th of May 2017, I will be speaking on the proposed Economic and Technological Cooperation Agreement between India and Sri Lanka at the invitation of the Jaffna Managers’ Forum. The talk will begin at 4.30 PM at the Euroville Conference Hall in Nallur. In addition to addressing the concerns of the opponents, I will be presenting ideas on why we need trade agreements to make it possible to participate in global production networks. The slides are here.

Informing youth of Jaffna on the potential of online freelancing

One of the main objectives of our joint effort with the Jaffna Managers’ Forum 18-19 October was to raise the awareness of Jaffna youth about the potential of online freelancing as a gateway to the service sector and to entrepreneurship. Suthaharan Perampalam communicates the findings from our research in a Tamil weekly, read in Jaffna.

PRESENTATION: Online Freelancing as a Gateway to the Service Sector

One member of the above-capacity audience at the Jaffna Managers’ Forum event on “Online freelancing as a gateway to the service sector” wanted to know why we were not providing detailed, how-to instructions on the use of Fiverr and similar platforms. He appeared to have trouble with the concept of a think tank that was simply raising awareness based on research findings, which had nothing to sell. Suthaharan Perampalam, who did the heavy lifting on this first initiative of the dissemination of the findings of our inclusive information society project, responded along with the Leader of the Opposition of the Northern Province legislature, Mr Thavarajah, and the questioner was satisfied. The starting point of our dissemination effort in Jaffna was the low level of awareness of online freelancing in the Jaffna District (19%) versus 26 percent awareness for the entire country and over 40 percent in the Wayamba Province. Jaffna has always been known for its emphasis on learning.

The liberating potential of social media

In light of what’s going on in North Africa and Western Asia, the liberating potential of social media is very much on the agenda these days. Here is Clayton Shirky on the subject in a debate in Foreign Affairs: It would be impossible to tell the story of Philippine President Joseph Estrada’s 2000 downfall without talking about how texting allowed Filipinos to coordinate at a speed and on a scale not available with other media. Similarly, the supporters of Spanish Prime Minister José Luis Rodríguez Zapatero used text messaging to coordinate the 2004 ouster of the People’s Party in four days; anticommunist Moldovans used social media in 2009 to turn out 20,000 protesters in just 36 hours; the South Koreans who rallied against beef imports in 2008 took their grievances directly to the public, sharing text, photos, and video online, without needing permission from the state or help from professional media. Chinese anticorruption protesters use the instant-messaging service QQ the same way today. All these actions relied on the power of social media to synchronize the behavior of groups quickly, cheaply, and publicly, in ways that were unavailable as recently as a decade ago.

In 2006, when I expressed skepticism about government claims that Jaffna was getting a fiber optic network in the middle of the war, I was assailed. Unless SLT has built a second cable in 2009, in addition to the one they built in 2006, I was right. This would be the right time for Mr N.P. Perera, or whoever he was, to apologize.

We assume that the failure of the Hikkaduwa tower will be examined as part of the comprehensive review the Minister has called for. The important thing is to think about warning as a chain with many links. If one link breaks, the chain breaks. The conclusions are that one must minimize the number of links and ensure that each is link is robust. It appears from the story that a link in the Galle district failed.

Internet out in Jaffna, according to Free Media Movement

Free media Movement – Sri Lanka Press Release 30 January 2007 Internet facilities and 8,000 telephones cut off in Jaffna Peninsula The Free Media Movement (FMM) is deeply disturbed to learn that basic communications facilities to the Jaffna Peninsula have been blocked from 28th January 2007. Internet facilities and around 8,000 landline telephones of Sri Lanka Telecom (SLT) are dysfunctional to date. SLT, jointly owned by the Sri Lankan Government and Nippon Telegraph & Telephone Corporation (NTT) of Japan, is the sole Internet provider in Jaffna Peninsula with a population of around 600,000 according to official statistics. The FMM was told that there is no official decision by the Telecommunication Regulatory Authority to block communications in this manner in the Peninsula. However, a number of citizens in Jaffna and journalists confirm that there is no Internet access in Jaffna for the past 3 three days, when contacted through mobile phones.

Over 200,000 in Jaffna deprived of phone service now for two months

Dialog Telekom took a courageous step in 2002, deciding within weeks of the Cease Fire Agreement being signed that it would supply telecom services to the people of the North and East who had been excluded from the country’s telecom revolution for so long, because of the conflict and the military’s prohibition of service in conflict areas.  The services thus provided were, without question, the most important dividend that the people of Jaffna saw from the path of peace, followed by the mobility allowed by the opening and restoring of the A9 highway.   Now, Dialog and the people of the North are paying the price of the path of war.  For two months, the mobile networks have been shut down in the North, with service being allowed intermittently in the East.  This means that approximately 220,000 families are unable to communicate with their loved ones in the North and that another 200,000 or so families are not sure their phone will work when they most need it.

NEWS RELEASE: Jaffnaites spend up to 12% of their monthly regular income on telecommunications