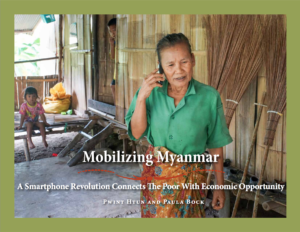 We have been an open research organization from the outset. Now our funders have made it a requirement. The principal rationale is that we want our research to be used. The nationally representative survey referred to below, by the authors of a major Gates funded study on mobile financial services, is our 2016 survey. Our research team conducted a country-level diagnostic that leveraged data from the Central Bank, Ministry of Communications, the three telecommunication companies operating in Myanmar, Facebook, Viber, a nationally representative Information and Communication Technology survey of 7,500 households, and recent census data from the UNFPA.

Gist of LIRNEasia research in Myanmar summarized on TV program

Ranging from the incredible advance of teleuse documented by two surveys conducted by LIRNEasia and MIDO to the potential of ubiquitous smartphones for making the lives of Myanmar’s disabled citizens better, Helani Galpaya summarizes the work being done in Myanmar since 2013 on MTV, a business-news channel. She touches on the need to work on digital literacy and talk about how we have been informed policy in Myanmar since 2013. 12 minute interview aired on MTV

Helani Galpaya, along with MIDO’s research team, released in Yangon the results of the second teleuse survey conducted in Myanmar earlier in 2016. The first coverage: People would only enjoy the fruits of digital development when the country overcame difficulties in promoting digital literacy skills, the survey said. According to the survey, 78 per cent of mobile handsets had access to internet, similar to the smartphone usage in the US. Mobile phone ownership had increased from 57 per cent in February 2015 to 83 per cent, it said. Almost every household owned more than two SIM cards while about 61 per cent of households had TV and only 16 per cent had a radio.

How different is the US from emerging Asia?

As we move toward the Next Billion surveys that will cover a lot more ground than the Myanmar we currently cover, it’s interesting to see what demand-side research looks like in other countries. Here’s Nielsen. In third-quarter 2016, 12% of smartphone owners said they had recently acquired their handset (within the last three months). Among recent phone acquirers in general, 93% chose to purchase a smartphone, compared with 90% in the third quarter of 2015. Overall smartphone penetration continues to rise rapidly, growing about eight percentage points year-over-year from 80% in third-quarter 2015 to 88% in third-quarter 2016.

A box in 2015-16 Affordability Report of the Alliance for Affordable Internet includes a box on gender which begins thus: By March 2015, just over a year after liberalising their ICT sector, 40% of Myanmar’s population between the ages of 15-65 owned a mobile phone. Yet, women were 29% less likely to own a mobile phone than men. To understand the reasons for this gender gap in mobile phone ownership, GSMA and LIRNEasia conducted a qualitative study among 91 men and women in Yangon, Myanmar’s largest city, and Pantanaw, a small town in the southwestern part of the country. The research showed that women in Myanmar play a prominent role in the management of household finances — even if they do not earn anything themselves — and are frequently involved in the financial decision to purchase a mobile phone for the family. Yet women’s access to this family mobile phone is often limited because the phone tends to travel outside the home, with the person who is deemed to need it the most.

LIRNEasia research cited in report on USD 25 smartphone in Myanmar

Even before we officially launch the gender study, it is being used in Myanmar. A recent report on gender and connectivity by GSMA and Sri Lanka based think tank LIRNEasia said that mobile phones have come to symbolise status in Myanmar. “Despite the cost barrier, people are often not interested in keypad phones or less expensive smartphones, which are also perceived as low-quality,” said the report. Mr Meza said that outside Myanmar’s cities, the phone would find its audience. “In Yangon people will go out of their way to get … the latest iPhone, Samsung, HTC [device], but the country has 680,000 square kilometres so life doesn’t end in Yangon.

It was tough going up against Helani Galpaya’s Zero Rating session, but the Myanmar session attracted 17 persons (I took some photos, but later realized that it is against SIF policy to take or publish audience photos without permission). I presented the “all fronts” approach of the ongoing LIRNEasia-MIDO Inclusive Information Society project as a framework for discussion and presented a subset of the Myanmar 2015 teleuse survey. After the contextual information, Htaike Htaike Aung, Yatanar Htun along with colleague Ei Myat Noe Khin from Phandeeyar presented the work they were engaged in, including app development, improving digital literacy and so on. Given conference’s thematic emphasis on gender, I showed that there was no gender disparity in terms of use, while there was a significant difference between male and female subscribers.

We tried very hard to get the Teleuse in Myanmar research findings disseminated before the big tidal wave of the 2015 Myanmar Election rolled in, washing away all else. But we were not completely successful and were somewhat disappointed in the amount of coverage we received. So we were very pleased to see the data being used in conversations about the election: Since the liberalisation of the telecommunications sector in 2014, unprecedented numbers of Myanmar citizens have obtained mobile phones, and with that internet access. A recent survey conducted by LIRNEasia on Myanmar’s ICT development found that 58 percent of households have access to a SIM card and 57 percent to a mobile phone handset. The survey also found that 17 percent of all phone owners use the Facebook application, behind only those using “Voice over IP” applications such as Viber and Skype (24 percent) and chat applications like Whatsapp and Facebook messenger (20 percent).

We have three press releases on the Myanmar teleuse baseline survey pointing out three particular stories. Press releases are available in both English and Myanmar as follow ; Fewer women own phones compared to men.  But due to shared use, the usage of phones is not very different between men and women. 99% of Ward/Village Leaders carry Mobile Phones. Only 89.

Two members of CPRsouth, Ibrahim Kholiul Rohman and Hasib Ahsan Nadeem, have collaborated on an evidence-based op-ed published in Indonesia’s leading English daily. I am very pleased about this. This kind of decentralized initiative is what we sought to foster through CPRsouth. But decentralized initiative also means that the policy recommendations may not be in line with what LIRNEasia would say, based on its research. Here is one such divergence.

This is not to dismiss the idea of connecting via mobile phones. I have spent the last few years researching the challenges of pulling together real connectivity and access for the poorest, and it’s no picnic. Infrastructure constraints, high taxes on imported computers, low income levels and connectivity problems all make the internet extremely challenging for the poorest to access. But is this a reason to give up entirely and focus on mobile instead as policymakers and researchers seem to be doing? At the Internet Governance Forum in Indonesia last week, the prevailing view was that the developing world would use mobile, end of story.

Few months back, our COO Helani Galpaya was out in the field in Indonesia, doing qualitative interviews with BOP teleusers. She picked up an odd response pattern: negative answers to questions about Internet use that would lead us to conclude the respondent was not an Internet user but claims that they were using Facebook on the mobile. So it seemed that in their minds, the Internet did not exist; only Facebook. This is the gist of the argument in Wired: Today, after just eight years in existence, Facebook now has more than 750 million users all by itself. At that astonishing rate of growth, the company is on track to accomplish much more than just a multibillion-dollar IPO.

Bangladesh: More-than-voice use of mobiles up; phone sharing down

Ericsson has released results of a representative sample survey (3,000 sample) of teleuse in Bangladesh. This is a rare quantitative study for the region. We hope to make a few more posts on it, hopefully after getting a hold of the full report. The Daily Star provides a summary worth reading. The trend towards internet use for social networking in urban areas of the country is growing remarkably, keeping pace with the global trend, he said.

Bill shock in the US; disconnect in South Asia

A major step in consumer protection has occurred in the US, with customers now being warned when their data usage and bills go above a threshold. Is this a problem for us in South Asia. Yes, for the TOP (top of the pyramid) customers who actually receive bills. But for our clients, the bottom of the pyramid teleusers, there will be no shock; just disconnect. Because 99.

CK Prahalad, bottom of the pyramid guru, passes away

It is a measure of CK Prahalad’s fame that I read about his demise in a Sinhala weekly. I had missed the story because I was teaching in Cape Town and then on the road until the end of April. But today, as I glanced through this low-circulation, but high-impact, weekly, I learnt of his passing. Last year, I was discussing the possibilities of inviting him to give lectures and interact with business leaders in Colombo and southern India. Our business partner was of the opinion that Professor Prahalad was not known widely in Sri Lanka and that we would have to do extensive marketing.

The Sunday Times (English) and Ravaya (Sinhala) carried the results of the migrant component of the teleuse research, making direct reference to the need to set the rules in place, a topic that was addressed in a previous issue of the Times by M. Aslam Hayat. “The challenge for mobile operators is to make a remittance service as simple as handing over the money and a slip, with hand-written transfer details, to a bank clerk,” said the study. On average, a Sri Lankan migrant sends home US $ 137 per month. The most common method of remittance is through the banking system.