The Ocean of Change

An exploration of megatrends
within the Asia-Pacific region 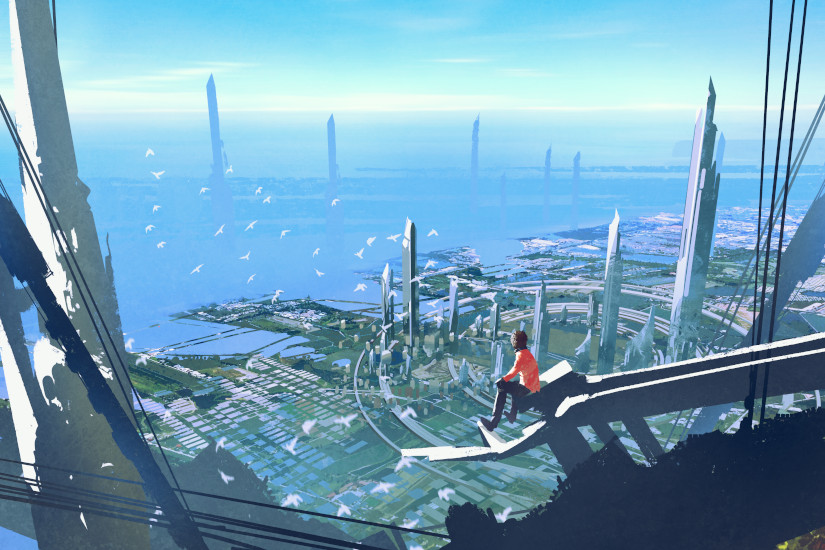 There is a tide in the affairs of men.
Which, taken at the flood, leads on to fortune;
Omitted, all the voyage of their life
Is bound in shallows and in miseries.
On such a full sea are we now afloat.

Throughout history, there have been sequences of events that are absolutely inevitable, beyond the control of any emperor or tyrant. If we, like Shakespeare, insist on seeing them as tides, one could say that the task of historians is to study little wavelets from the past and try to piece together the biggest tides that shaped the day; and what we manage to cobble together we call history, as we know and study it.

These tides are not things relegated to retroactive wisdom and stage tragedy. The Office of Strategic Services (OSS) – the forerunner of today’s CIA – and  John Naisbitt – formerly of IBM and Eastman-Kodak, later heavily involved with the US administration in Washington – famously took to the analysis of content in order to influence both war and public policy. Naisbitt, in particular, brought together the word ‘megas’ (Greek: great) with Old English trendan, turning it into a word that captures these long-term shifts in our geopolitical, macroeconomic and environmental reality – a suitable word for describing future-facing tides of Shakespearean import. Today, the United States National Intelligence Council expends enormous effort on imputing the shape of these megatrends ahead; likewise, Europe has its own bodies, and Australia has CSIRO.

The problem is that most approach this question from the perspective of some first-world country or the other, and usually miss out on perspectives from the Asia-Pacific region that we play in. Which is, in our opinion, a mistake: not only does the APAC region host some 4 billion people, but from the story of China’s metamorphosis to become an economic powerhouse, to the evolution of Singapore as a lab, the APAC abounds with experiments that have led to significant social change. The development challenges that we face, ranging from inequality to climate change and global warming – are complex and devastating. The response from states ranges from laconic to full-on tactical combat with the beast at hand. There is a need for a much more nuanced conversation: for futurism that merges existing projections with deeper insights on the states (and nonstate actors) driving strategic innovation on our side of the pond; for scanning that sheds some light on under-the-radar players doing things that might lead to very different versions of our future.

We thus embarked on our own study of megatrends, centered on the APAC region, around a 2030 timeframe. Instead of limiting ourselves to just newspapers, we performed content analysis on national policy documents from influential governments in the region, and futures forecasts from noted bodies. We paired this with statistical projections from a range of bodies such as the APERC, the UNDP, and academics in economics. The synthesis we re-examined with consultation from a select set of experts to better extract the signal from the noise.

What follows, then, is the result of our first attempt at mapping the tides of this full sea. As a think tank engaged in public policy, we have a particular narrative framing. Some element of rationalization has been performed; certain types of information privileged over others; therefore, we borrow from Alford Korzybski and advise caution: A map is not the territory it represents, but, if correct, it has a similar structure to the territory, which accounts for its usefulness.

This is, therefore, a map of the future of the APAC region. We hope that it may be useful.

How to consume this research

One of the problems of investigating trends is that they invariably impact each other. Thus, reading a report – a fixed, linear narrative – is not an optimal way to go about this. We have arranged our work into six core pieces charting both the inevitable changes on a 2030 timeline; regional shifts to face the challenges presented, and wildcards that can throw monkey wrenches in the works. While almost everything is connected to everything else, the connections are not linear in nature; hence the squiggles. 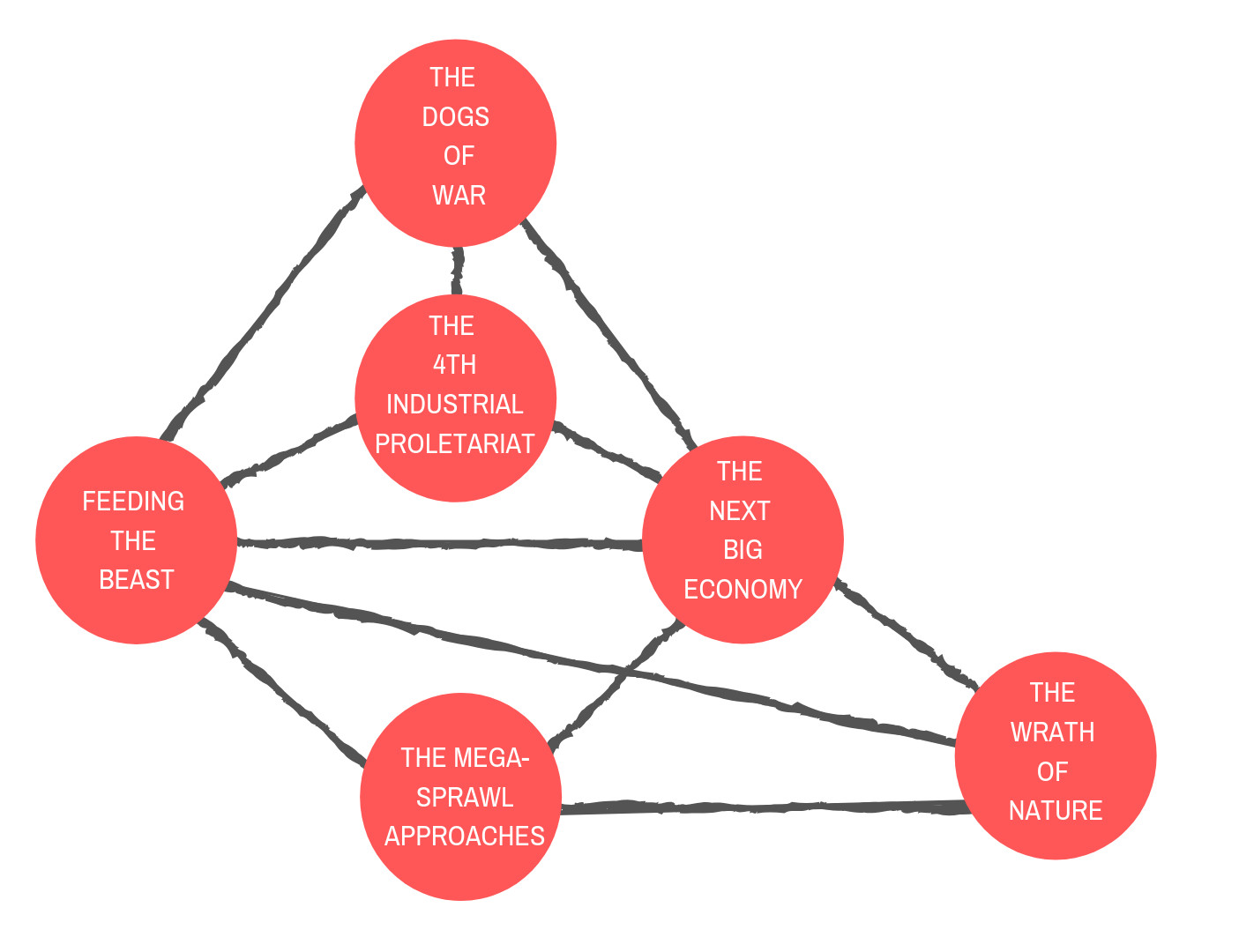 Each piece is orbited by “satellites”: pieces digging into a more granular set of events or wildcards. We recommend starting at Feeding the Beast, and follow it through to associated satellites: follow those through to the other core pieces, rinse and repeat. Alternatively, breeze through the core pieces first, like an Inner Ring providing the 30,000-foot view, and then move on to the satellites.

A word of warning

Of course, this kind of top-heavy analysis – especially with established gaps in information – comes with caveats. Of trade movements between the BIMSTEC countries, for example, we have little to say. Internal migration and rapid urbanization affect every country here, but we must focus on India and China, as the elephants in the room. Of indigenous movements, there is almost no mention, save for when something becomes large enough to be reflected in government policy.

And while hindsight is always 20/20, no act of foresight can be ever said to be completely accurate. As Thomasina, the child prodigy in Arcadia, notes: if you could stop every atom in its position and direction and if your mind could comprehend all the actions thus suspended, then if you were really, really good at algebra you could write the formula for all the future. . . although nobody can be so clever as to do it. We have neither the skill to stop the universe nor the wisdom to compute such transcendent math.

But we hope that we may see the tide before it engulfs us. We believe that the continued exercise of such will lead not only to better futurism, but better lessons for policy change and governance models. After all, as the Mahabharata says:

Change is the law of the world.
In a moment you become the owner of millions,
In the other you become penniless.

This report has been written by Yudhanjaya Wijeratne, Merl Chandana, Sriganesh Lokanathan and Shazna Zuhyle with contributions from Rohan Samarajiva.

This work has been written expressly by LIRNEasia with commissioning by the UNDP Regional Innovation Centre (RIC) as an exploratory and intellectual analysis; the views and opinions published in this work are those of the authors and do not necessarily reflect or represent the official position or policy of the RIC, United Nations Development Programme or any United Nations agency or UN Member States.